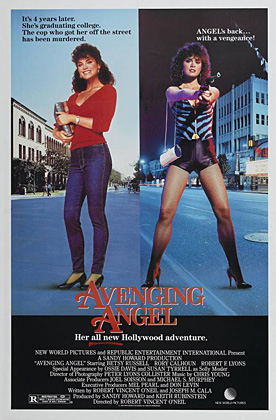 Sequel to New World’s exploitation hit Angel was rushed into production and released just under a year from the 1984 original…and it shows. The story has Molly/Angel (now Betsy Russell) off the streets and in college for four years, thanks to Lt. Andrews (now Robert F. Lyons). When Andrews is gunned down by a group of mobsters, Molly returns to the streets as Angel to track down his killers. Helping her are her old street ‘family’ Kit (Rory Calhoun), Solly (Susan Tyrrell), Yo-Yo (Steven M. Porter) and witness Johnny Glitter (Barry Pearl).

While the creative team of writer/director Robert Vincent O’Neill and co-writer Joseph Michael Cala return, lead actress Donna Wilkes and actor Cliff Gorman did not and it hurts the continuity of the flick. Add to that a new cinematographer, Peter Lyons Collister, giving it a different look and new composer, Christopher Young giving it a new score and you get a film that barely registers as a sequel if not for Calhoun, Tyyell and Porter to give it a familiarity with the first flick. That aside, the exploitation elements are really watered down and it feels like a TV movie. O’Neill gives it none of the style and fun trashiness of the original and the story is very uninspired. There seems to be an effort to clean it up for more mainstream consumption to the point of a baby being added to the proceedings, which is completely unnecessary. It’s got none of the energy the first flick had either, nor the atmosphere of the streets that the first flick used so well. The acting is very wooden, except for the delightfully energetic Calhoun and Tyrrell and despite being quite a fox, we don’t endear to Russell’s Angel as we did with the sympathetic teen street walker of Wilkes’s incarnation. It feels like a totally different film and a totally different kind of film, as it tries to be more action flick than exploitation movie…and being an exploitation movie was part of what made the first film work. A high school hooker being hunted by a serial killer is sleazy fun, some college girl avenging a friend’s death in fishnets and a miniskirt, not so much.

I actually saw this chapter in a theater and it was very disappointing. The original Angel nailed the exploitation tone perfectly for a story about a high school student turning tricks as a Hollywood hooker and this film tries to downplay it’s sleazy roots and go for a more mainstream low budget action flick and fails. None of the style or trashiness that made the first flick so enjoyable is there and one wonders if writer/director O’Neill wanted to do this movie at all and was just accepting a paycheck. If not for a few supporting characters being present and acted by their original performers, this would not feel like a sequel to the 1984 hit. When you throw in the baby and a lot of broad humor, it almost isn’t. Despite under-performing at the box office, there were two more sequels with two more actresses as Angel. Avenging Angel also stars Escape From New York’s Frank Doubleday as a mobster’s arrogant son. 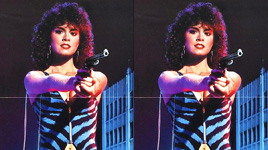 Simple story has emotionally fragile Alison (Russell) going to Camp Hurrah cheerleading camp for the summer. Soon after her arrival, there is an apparent suicide and people start disappearing. It finally becomes evident that someone is targeting cheerleader and counselors alike and there may be no escape for Alison and her friends…unless there is some truth to her vivid dreams and Alison is the one her friends need to fear!

The only thing creepy about this slasher is that Leif Garrett is pushing 30 and his receding hairline makes him look far too old to pass himself off as a teenager. As directed by John Quinn, from a script by David Lee Fein and R.L. O’Keefe, this is a slow moving and very routine slasher. There is a long time between killings and despite a fair amount of suspects, very little tension or suspense. The film only really gets going in the last 10 minutes or so, and by then we’ve figured out who the killer is long before the last scene reveal. Sure there is a very attractive cast of cheerleaders, but the acting is pretty wooden all across the board and eye candy is more the purpose of the predominately female roster. The males are mostly there to be suspects or horn-dogs and the suspects are a little too obvious to actually be the real killer. There is some nice 80s nostalgia, too, but as a slasher, the body count is low and the gore moderate and only moderately effective. There is humor sprinkled throughout, but it doesn’t blend well as the rest of the film seems to be taking itself very seriously. The film is, for the most part, fairly forgettable if not for the nostalgia factor.

Overall, there isn’t too much to say about this flick. As a slasher it is very routine and generates little tension or suspense. As an 80s movie there is plentiful nostalgia, especially due to a plethora of 80s B-Movie regulars. There is certainly a lot of eye candy from the nubile cast of models and B level starlets, but as a movie, it’s not bad enough to be enjoyed on that level and definitely not very good as a legitimate slasher. If you are an 80s completest, like me, it’s worth a look, but don’t expect much.