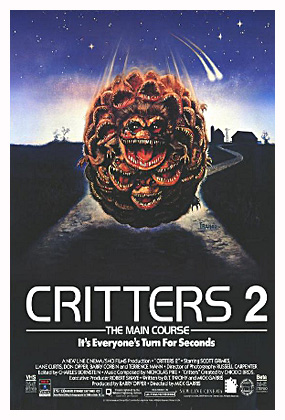 Sequel to Critters finds the Crite eggs seen at the end of the first film finally starting to hatch two years later at Easter time. This gets bounty hunters Ug (Terrence Mann), Lee (Roxanne Kernohan and Eddie Deezen) and Charlie (Don Opper) summoned back to earth. At the same time, Brad Brown (Scott Grimes), whose family had moved away, is returning to Grover’s Bend to visit his grandma (Herta Ware). Now in greater numbers, The Critters descend on the town and only Scott, Harv (Barry Corbin replacing M. Emmet Walsh) and the bounty hunters are all that stand between feast or famine for the fanged alien fur-balls.

Sequel is the directorial debut of Mick Garris (Sleepwalkers, The Stand) who wrote the script with David Twohy (Pitch Black and it’s two Riddick follow-ups). As such, it’s somewhat fun, but the material is already running out of gas, as it’s basically the first film all over again just bigger. The FX are still cheesy and the gore and brief nudity do again stretch the boundaries of it’s PG-13 rating, but the sequel, otherwise, plays it safe story-wise. There is a romantic interest for Brad, named Megan (Liane Alexandra Curtis), but otherwise there is little new as The Critters make mincemeat out of anyone that crosses their path. There is still some fun to be had, but the novelty, of something that is technically already a Gremlins clone, is definitely wearing off. The film under-performed at the box office, but still spawned two more direct-to-video sequels…the third being the acting debut of one Leonardo DiCaprio.

The cast seem less enthused than the previous film. Grimes tries hard, but it’s a bit off-putting that he seemed to be playing a much younger kid only two years earlier and now is playing a young man of his real age (17 at the time) with love interest and all. The film literally takes place only two years later and the difference seems odd. Mann and Opper repeat their roles fine with Charlie now being a bounty hunter and it is fun to have Lee zero in on an identity straight out of Playboy magazine, in the form of statuesque beauty Roxanne Kernohan. Barry Corbin is now playing Harv and makes the character his own to the point where it didn’t really need to be Harv, when all is said and done. Liane Alexandra Curtis makes a cute love interest/sidekick for Brad, as teen reporter Megan and Lin Shaye is back hamming it up as Sally.

It’s not as fun as the first film, which in itself was basically a rip-off of another flick, but is far from terrible. There are some laughs and some amusing gore and even a touch of nudity this time, despite a teen friendly rating. The FX are still amusingly cheesy, though the cast seem to be just running through their paces in this one. It’s still worth a look and does make a good double feature with the first flick, but it’s not quite the equal fans would have hoped for. 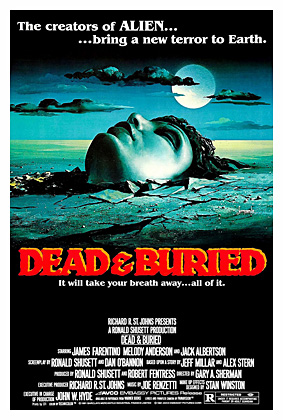 80s horror written by Alien scribes Ron Shusett and Dan O’Bannon seems to have developed a reputation and a cult following since it’s unremarkable release back in 1981…but is that rep and following well deserved? In my opinion…not really.

The story finds a series of murders perpetrated against visitors in the small town of Potter’s Bluff and the efforts of Sheriff Dan Gillis (James Farentino) to solve them. The more Gillis investigates, the more bizarre a direction the evidence seems to lead him. Worse still, the more it starts to appear the locals he’s known all his life are not who, or what, they seem and the town’s kindly mortician (Jack Albertson) might be at the center of it. Will Dan be able to solve the case, or will it be the death of him?

Flick has an atmosphere that is a bit unsettling throughout and a nice visual style, but that’s all director Gary Sherman (Vice Squad, Poltergeist III) accomplishes, as his direction is rather flat. He creates no suspense for the proceedings and no impact to the gory kill sequences. All the victims are introduced moments before their deaths, so they are just subjects for Stan Winston’s gore effects. Sherman also evokes very little in terms of performance from his cast and while the townspeople’s trance-like demeanor might be on purpose, that doesn’t explain everybody else. The dialog is terrible at times and the basic story of a strange little town where out-of-towners are offed with bloody regularity, is nothing new, though, the climactic revelation is a bit spooky and different. You can at least give it that.

There is a good cast here which, aside from Farentino and Albertson, also includes Melody Anderson as Gillis’ wife, and familiar faces Lisa Blount (Prince Of Darkness), Barry Corbin (WarGames) and Robert Englund (Do I need to tell you where you’ve seen him?), but they aren’t utilized to maximum effect and it’s a shame. With it’s premise and the direction the story leads, there could have been a really good movie here, had the film been in hands that had a better idea of what to do with it.

An odd little movie that doesn’t quite accomplish much else than being moody, atmospheric and weird though, Buried is still off the beaten path from the run-of-the-mill slasher flicks that were popular at the time. By today’s standards Dead And Buried is quite dated, tame and slow moving, but for horror fans it’s definitely worth a curiosity viewing, just don’t expect the hidden classic some make it out to be.

WARNING: Trailer is graphic and contains spoilers if you haven’t seen this flick…