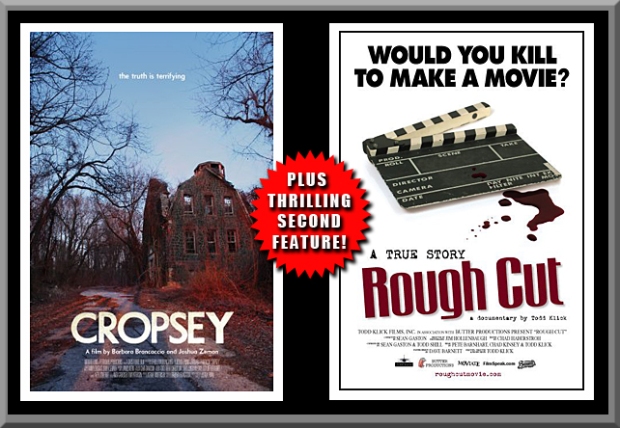 I wanted to do something a little different for today’s Saturday Night Double Feature! So, I decided to take a look at two very chilling documentaries that are as effective and goose-bump inducing as any fictional horror flick out there… all the more so because their stories are true…

Cropsey is a very interesting and disturbing documentary from writer/directors Barbara Brancaccio and Joshua Zeman about the disappearances in Staten Island of five children and the homeless man allegedly responsible, Andre Rand. The filmmakers use a local urban legend about a killer named Cropsey to frame the real story of the disappearances in the late 70s and 80s. And while Rand was a prime suspect and eventually arrested, there are enough doubts and questions as to whether he was truly responsible, or was used as a scapegoat to satisfy a terrified community’s need for closure and justice. Rand was never convicted of the actual murders, though was previously convicted for child related crimes, as only one of the children’s bodies was ever found. He was convicted on kidnapping charges for two of the five children to whom the police were able to link him. But questions still linger and the documentary asks whether it was really Rand, who was a former employee of the horribly run Willowbrook State Institution, that housed handicapped children, or was it cultists have been known to conduct ceremonies in and around the now abandoned institute…or someone else. The documentary basically presents the story as is and let’s you decide whether justice was served or is there something more sinister that went on in the borough of Staten Island during this almost twenty year stretch. A very unsettling documentary about the still mysterious circumstances of these events and their lingering effects on the surrounding community.

Rough Cut is an extremely disturbing and absolutely bone chilling documentary about an amateur filmmaker who agrees to murder his friend’s wife to pay for his low budget horror movie. Todd Klick uses interviews with family, friends, police and the cast of the horror film in question, along with news footage, stills and actual footage of the filming of “Hike Through: A Ghost Story” to paint a haunting portrayal of filmmaker Blaine Norris and friend Brian Trimble, who carried out a brutal act that could serve as a plot for a horror film in itself. Klick’s documentary is equal parts fascinating and horrifying as it paints a portrait of two Pennsylvania friends who, at first seem like your average film nerds/geeks, but the deeper we are pulled into their worlds and the more we learn about them, we start to find out that they both (especially Norris) are actually two very disturbed individuals.

The documentary starts up with Randi Trimble’s brutal murder in January 2003 and then traces back to her and Brian Trimble’s wedding and Blaine Norris’ subsequent quest to make a low budget horror film. We then move forward using the police investigation and the other interviews to gradually unveil how problems in the Trimble marriage and the financial burden of Norris’ film brought these two emotionally deranged individuals to plot the vicious murder of Randi Trimble, which Norris would agree to carry out in exchange for enough money to pay off his movie debts. This is a very haunting journey filmmaker Klick takes us on from the opening news footage of Mrs. Trimble’s murder to the final frames that rest on her grave. It is a true story of two very unhinged men that will stay with you long after the documentary is over. A powerful and deeply affecting film.

I could not find a trailer for Rough Cut but, it is rentable from Netflix.