Revival of the classic franchise is sadly disappointing as the Krites…or Critters…return to earth after last being seen here in 1991’s Critters 3. They land near a small town, much like in the first two features and start to chow-down on the inhabitants. They cause trouble most specifically for a babysitter (Tashiana Washington), her two charges (Jack Fulton and Ava Preston) and her younger brother (Jaeden Noel), who find a friendly Krite female while hiking. Luckily Dee Wallace shows up (reprising her role from the first flick…maybe?) and goes Critter hunting!

Sequel is directed very by-the-numbers by Bobby Miller from a witless and dull script by Scott Lobdell. It’s so low budget, it looks like someone’s homemade fan film and the acting is strictly amateur, save for the veteran Wallace. Aside from the female Krite our teens adopt as a pet, there is little new or innovative here and not much reason to revisit this franchise. There is some decent gore…when they bother to show it, and the Critters are delightfully still rubber puppets, but there is little fun in their new exploits. At least there is a cool 80s-ish soundtrack from Russ Howard III.

A sadly underwhelming direct-to-digital sequel that begs one to revisit the originals instead…at least the first two anyway. While on the subject, there is also Shudder’s Critters: A New Binge web series, which is supposedly not much better. 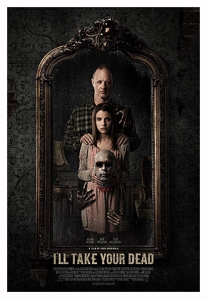 William (Aidan Devine) is a widower who lives on a remote farm with his twelve year-old daughter Gloria (Ava Preston). He also disposes of bodies for a gang from a nearby city, a livelihood he’s never wanted and plans to escape. Things become complicated for William and Gloria when one of the bodies deposited on his doorstep is not quite dead. Now with the young woman Jackie (Jess Salgueiro) a reluctant hostage and the gang members wanting her dead for good this time, William’s plans to get away from it all are suddenly coming down around him.

Flick is well directed by Chad Archibald (Bite, The Heretics) from a script by frequent collaborator Jayme Laforest. While on the outset it’s an offbeat crime drama, Archibald adds a spooky element as it seems the dead disposed of by WIlliam still very much haunt this farmhouse, especially Gloria. It takes the film into supernatural territory, especially when the gang shows up at the door for Jackie and their previous victims are not happy to see them. It makes an already interesting movie very creepy at times and Archibald gives it a lot of atmosphere. LaForest’s script gives us characters that are not inherently bad, just forced into their morally ambiguous lifestyles, which makes them intriguing. William really just wants the best for Gloria and not quite a corpse Jackie is just trying to survive a hard life on the streets. The cast all do well in bringing the characters to life, especially young Ava Preston as Gloria, whose only friends are ghosts. As for the the bad guys, they are more cliché gang member types, but serve their purpose well as the villains of the piece. There is some bloody violence and the make-up on the dead that inhabit William and Gloria’s home is very effective, as is Archibald’s visual style.

A offbeat and unusual thriller that successfully mixes crime drama and supernatural chiller quite effectively. Chad Archibald has made some effective flicks and people should be keeping a closer eye on he and writer LaForest. Recommended for something a little different and spooky. Check it out on Amazon Prime.

Normally I don’t post trailers on Bare Bones, but I think it’s worth a look!