I know this is the Movie Madhouse but, I did love this book and think it would make a great flick!

This delightful fantasy adventure starts out with the cruel conqueror Corvis Rebaine laying siege to yet another city in his bloody quest to rule all the land. But, when his plans go awry, he takes a young woman hostage and then the so-called ‘Terror Of The East’ disappears without a trace. 17 years later we find the vile Rebaine has not only married his fair hostage but, has two children and lives peacefully with his family in a secluded cottage. A changed man. But, when his humble and happy new life is shattered by the advent of another would-be conqueror, Audriss The Serpent, Rebaine finds he may have to wear his black steel and bone armor once more and once again carry his axe into battle to save all that he holds dear. Can the former tyrant now play the hero? I really enjoyed this book! Writer Ari Marmell spins a wonderfully entertaining yarn and makes you root for a hero who was once a despicable villain. And that’s one of the strongest aspects of this book, the engaging and colorful characters Marmell fills it with. Whether it be the character of Rebaine himself, his allies… most notably  a cantankerous cyclops, an imprisoned demon and a witch with a taste for human flesh… who want to see him dead as much as his enemies, or the adversaries he faces, the author knows how to create memorable characters and some very sarcastically witty dialogue. And while the book is filled with non-stop action, chases, gruesome battles and feats of magic, it is the characters and their banter that really entertains in this fast paced read. A thoroughly entertaining book and I can’t wait to read the sequel, The Warlord’s Legacy!… and is it the movie geek in me imagining things, or was there a nod to the Japanese fantasy film classic The Magic Serpent during the last act???

So, if I were a Hollywood producer, I’d get this movie rolling instead of the umpteenth, unnecessary remake and hire Robert Downey Jr. to play the lead! He would make a great Corvis Rebaine! 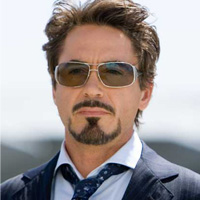