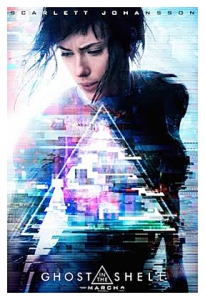 Based on the classic Anime of the same name, flick tells the future-set story of The Major (Scarlett Johansson), who is the first of her kind, a completely cybernetic being with a human brain. The Major is part of an anti-terrorist unit and is called to action when members of Hanka Robotics, the folks that created her, are being murdered. The Major’s journey to find those responsible takes a very personal turn which may compromise her mission and cost her, her life.

On one hand it’s amazing that Blade Runner and The Matrix are still influencing movies and film-makers today, while on the other hand it’s getting kind of tiresome to see the same neon drenched city-scapes and slow motion gunfight scenes. As for the 1989 Anime by Masamune Shirow, it was ground breaking in it’s day, but almost twenty years later, the story elements have been reused and warn out. So despite some hefty influences and classic source material, this live action version has nothing really to offer and director Rupert Sanders and his script by three writers can’t change that. It’s a dull affair with plot and visual elements that we’ve all seen countless times since the films that inspired them. Even Ms. Johansson’s charms are lost among-st all the “been there, done that” and barely make this watchable for. A cyberpunk snoozefest. At least the score by Clint Mansell and Lorne Balfe was 80s electronic cool.