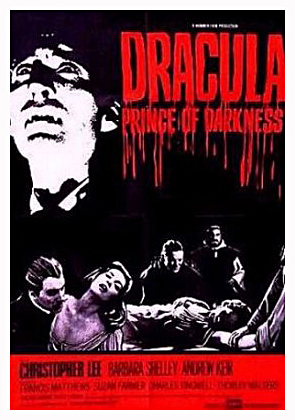 Eight years after Horror of Dracula, Christopher Lee and The Count returned, as did writer Jimmy Sangster, from a story by Anthony Hinds, and director Terence Fisher. Sequel takes place ten years after the previous film’s events with the villages surrounding Dracula’s castle still fearful and superstitious, despite his demise. Two couples are journeying past and are warned not to go to nearby Karlsbad and certainly stay away from the castle. They do not listen and when their driver abandons them on the road, a mysterious carriage picks them up and brings them to the castle. A man named Klove (Philip Latham) claims to be the servant of the long dead Dracula and that his master bid the castle always be prepared to receive guests…I’ll bet! Klove sacrifices one of the guests and pours their blood over Dracula’s ashes and soon The Count (Christopher Lee) rises from the dead and is hungry for the surviving members of the ill-fated party. Will they survive his thirst even with the help of a vampire savvy monk (Andrew Keir)?

Sequel is fun but, is a bit of a letdown when compared to the first film. Fisher does give the film some atmosphere and it can be quite bloody, but, it takes half the running time for Dracula to finally rise and then he doesn’t have all that many scenes. That and he never speaks a world of dialogue, just glares or hisses when angered and robs us of Lee’s intimidating baritone voice and impeccable line delivery. Andrew Keir’s Father Sandor is a fine enough adversary but, he’s no Van Helsing and no Peter Cushing. It’s a mystery why Cushing’s vampire fighter wasn’t brought back till Dracula A.D. 1972. The sets and production design are still a gothic treat and there is some intense action but, it’s too bad the film waits 45 minutes to reintroduce The Count and then never really gives us time to re-establish his threat. The film is technically sound. There is another effective score by the returning James Bernard and Michael Reed matches the muted color scheme of Jack Asher’s cinematography from the first film. A lesser effort but, still has a lot of what we like in these movies.

The cast are all fine. Lee is still intimidating as Dracula despite being given no dialogue and only having maybe ten minutes, or so, of screen time. Andrew Keir is suitable enough as Father Sandor and he is a good character but, Cushing’s Van Helsing is sorely lacking. Renown British actress Barbara Shelley makes for a fine female lead and then vampiress, but, it is Suzan Farmer’s Diane who is the real heroine of the film, though pretty much just a damsel in distress. Francis Matthews is a fine hero as Diane’s husband Charles who confronts Dracula to save his wife. Rounding out, Charles Tingwell is the ill-fated Alan Kent and gives his character some life while he is onscreen and Thorley Walters gives an off-beat performances as the disturbed Ludwig, a Renfield-like character who has encountered Dracula before and may still be in his thrall.

The film may not equal Horror of Dracula but, is still full of charm and fairly entertaining. It does make a bit of a mistake taking so long for Dracula to finally show up and then giving him nothing to say, but, Lee makes him intimidating despite minimal screen time and being reduced to more of a simple monster. It’s not the worst of the series and a lot of these flaws would be fixed in the following entry, Dracula Has Risen From The Grave!