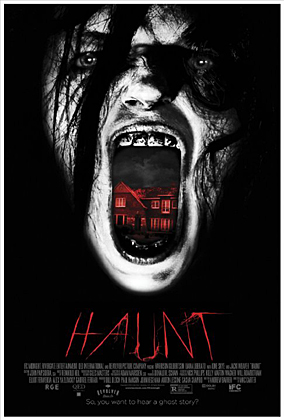 Haunt is a very routine haunted house thriller but, it did hold my interest and was effective enough to be entertaining. The story has teen Evan Asher (Harrison Gilbertson) and his family moving into a house where there were four unfortunate deaths…which is NEVER a good idea. Soon after, Evan starts to see evidence of paranormal activity…SEE! When troubled teen neighbor Sam (Liana Liberato) convinces Evan to investigate, things at the Asher house take a turn for the supernatural worse as an angry spirit makes it’s presence known. Did this spirit cause the deaths of members of the former occupants, the Morello family years earlier?…or is there a far darker secret this specter wants to reveal?

On the positive side, Haunt is competently directed by Mac Carter from Andrew Barrer’s script. While Carter doesn’t really generate much in the way of true scares and tension, the film does have atmosphere and the numerous jump scares do work more often than not. The film looks good as shot by Adam Marsden and the young leads are likable and have a nice chemistry together so, it makes their relationship work. The film may be routine and predictable at times but, I will admit I was not expecting the climax to play out as it did and the big reveal was effective. On the downside, Barrer’s script is very familiar and the fact that the Ashers move in having full knowledge of the Morello deaths was a bit hard to swallow. Even though Evan’s parents (Ione Sky and Brian Wimmer) seem like non-believers when it comes to the paranormal, they seem to let a lot of weird stuff slide, too. The plot point that the littlest Asher, Anita (Ella Harris) appears to be communicating with the Morella’s youngest daughter (Maggie Scott) is just dropped and goes nowhere after a few instances. The subplot of Sam having a drunk and abusive father also never really has any real impact on the story as it never leads to anything or really has too much baring on things, other than to get Sam over at Evan’s for prolonged periods of time. The big reveal also poses as many questions as it answers but, I won’t ruin any surprises by discussing details.

Haunt is a mixed bag but, I was entertained and it did have some effective elements and a surprise or two. It may not be anything new or groundbreaking but, also wasn’t outright bad or badly made either. It’s a mildly entertaining chiller that will pass the time effectively enough but, will quickly be forgotten. Also stars Jacki Weaver as the last surviving member of the Morello family and a creepy one at that.