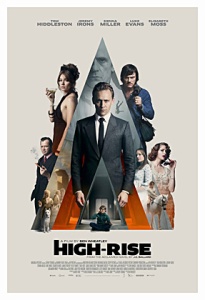 Barely coherent British film has Dr. Robert Laing (Tom Hiddleston) moving into a luxury high rise and discovering his neighbors are quite an eccentric bunch. The longer he lives there, the more decadent and out of control the activities get till it descends into a maelstrom of debauchery and even murder.

Written by Amy Jump, from J.G. Ballard’s novel and directed by Ben Wheatly, this flick starts out interesting and plummets quickly into pretentious nonsense quite early. There is a good cast, including Hiddleston, Luke Evans, Jeremy Irons and Sienna Miller, who try hard, but they are wasted on this boring and meandering mess whose story and point are lost in all the random violent and decadent behavior. A waste of time that thinks it’s far more important than it is. 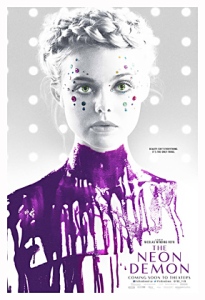 Latest film by Nicolas Winding Refn (Drive) has sixteen year-old Jesse (Elle Fanning) going to Hollywood to become a model. She takes the modeling world by storm, but soon learns there is a dark side to her dream and there are those who will go to shocking lengths to keep the new competition from taking what’s theirs.

Obviously, the story concocted by Refn and co-written with Mary Laws and Polly Stenham is nothing new. We’ve seen the naive newcomer in the Hollywood jungle story numerous times. Neon Demon starts out intriguing, though and Refn’s visual style is hypnotic at times, but the film collapses under the weight of it’s own absurdity when it goes over the top to include necrophilia and cannibalism in it’s cautionary tale. The cast, that includes Fanning, Jena Malone and Keanu Reeves perform well, but the film just gets too weird…and gross…to maintain it’s dramatic grip.