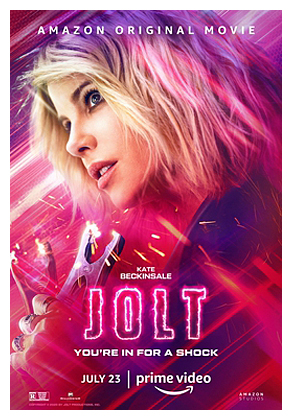 Lindy (Kate Beckinsale) has a condition that only could happen in a movie like this. Not only does she have Intermittent Explosive Disorder, but also has excessive amounts of cortisol in her body, so when she does get enraged, it gives her augmented strength and agility. She has been studied and in therapy since childhood and now works as a bouncer. She finally meets a nice guy, Justin (Jai Courtney), who accepts her affliction, only to have him murdered just as she starts to care about him. Now Lindy uses her condition to her advantage, as she tracks down Justin’s killers to get revenge.

Yet another flick that wants to be hip while mixing hyper-violence and offbeat humor and fails miserably. Amazon Original is routinely directed by Tanya Wexler from an unimaginative script by Scott Wascha. It’s dull, even though filled with violent encounters, and almost all of the attempts at humor fall flat. The CGI blood spatters soften and lead Beckinsale seems to try hard as Lindy, but this flick shambles along from one dull fight to the next and even the surprise ending is exactly how we knew this would end up. Simply a waste of 90 minutes and a waste of Beckinsale, Courtney and Stanley Tucci, who plays Lindy’s therapist.