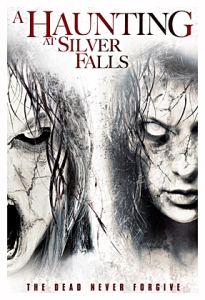 Scare-less flick has pretty, orphaned teen, Jordan (Alix Elizabeth Gitter) moving in with her aunt (Tara Westwood) and uncle (Steve Bacic) in the town of Silver Falls after the death of her father. Soon Jordan becomes haunted by the spirits of two twins who died mysteriously. No one believes Jordan, but is this a haunting or a warning?

Directed by Brett Donowho from a generic script by three writers, no less, this is a completely routine haunting flick. We have the lonely teen who stumbles onto a past murder/death and is now being haunted. Her only friend is the local outcast (Tadhg Kelly) and as she has experienced a personal tragedy, no one believes this is anything but emotional duress. Flick has a scant few spooky moments and Gitter makes for a cute, likable and thus sympathetic heroine, but otherwise this supernatural thriller is as cookie cutter as they come. The end reveal is no surprise as we are expecting something like this since we’ve basically seen this movie before. Not quite a complete waste of time, but one can do much better.