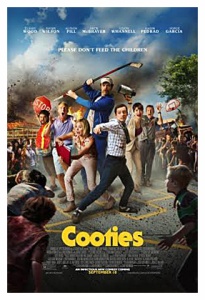 Horror comedy finds a group of summer school teachers under siege from a horde of students turned into flesh eating zombies by some rancid chicken nuggets. Written by Leigh Whannell and Ian Brennan, this flick gives us nothing fresh or new in the zombie sub-genre, whether it be comedy or straight horror. It’s all been done before. The direction by Jonathan Milott and Cary Murnion is very by-the-numbers and none of the humor is really all that funny. There is some abundant gore and the cast, including Elijah Wood, Alison Pil and Rainn Wilson seem to be having a fun time, but not much of that really translates to the audience…unless you think simply seeing students kill their parents and teachers, or teachers killing their students, is funny. The film’s attempts to be clever are far too obvious to be successful, like the town being called ‘Fort Chicken’ and Elijah Wood’s Mr. Hadson being compared to a Hobbit by Rain Wilson’s cliché redneck. That’s pretty much the level this flick is on. Overall, it’s kinda dull even at less than 90 minutes. The students-turned-zombies Halloween episode of Community was a lot funnier with a similar plot.