Glow is a fun and nostalgic 2017 Netflix original show based on the Gorgeous Ladies of Wrestling tv program that ran from 1986-1990. The original show featured a bevy of female wrestlers performing cartoon-ish stereotype characters and soap opera-esque story-lines along with in-ring matches…which isn’t too much removed from professional wrestling in general. This ten episode Netflix series fictionalizes the creation of the show when struggling exploitation director Sam Sylvia (Marc Maron) agrees to put an all girl wrestling show together for wannabe producer Sebastian (Chris Lowell) who has a rich mother. Sam’s actual goal is to get “Bash” to fund his next flick. Answering the audition call for the Gorgeous Ladies of Wrestling are down-on-her-luck actress Ruth Wilder (Alison Brie), her former best friend and ex-soap opera actress Debbie (Betty Gilpin), along with ten other women. The show mixes comedy and drama as it chronicles Sam and the ladies’ struggle to train, come up with their characters and get along, without killing the show, or each other, before they even step into the ring.

Glow starts off a bit shaky, but after a few episodes hits it’s stride quite nicely. The shaky start is due to the need to get the story moving quickly as there are only ten, half-hour episodes to tell it. The show needs to establish Ruth and Debbie as friends, turn them into enemies…when Ruth sleeps with Debbie’s husband (Rich Sommer)…and then thrust them back together as they become the show’s intended star rivals. This is hastily done in the first two episodes and doesn’t quite gel as we never get a feel for them as friends before they are at each others throats, literally. Ruth’s motivations for sleeping with her friend’s husband are never really convincing either. Just not enough time to really make it work. Once this occurs, the show kicks into gear as the production seems doomed from the start, yet the group start to come together like a dysfunctional family to try to make it happen. Not everything works, like an abortion sub-plot that literally lasts for one episode and seems to add nothing, and occasionally some of the humor falls flat, though mostly it works. Otherwise, this is a lot of nostalgic fun, especially if you remember the actual show that inspired it, or are a fan of everything 80s. The finishing touch is that it’s all wrapped in some awesome 80s tunes across it’s ten episodes and the whole thing leaves us wanting more.

The cast work really well and as a character driven show that is important. Alison Brie has shown a flair for comedy in the TV sitcom Community and some of her recent film roles and she shines here as Ruth. Ruth sees herself as an actress and it takes a while for her to get used to this brand of acting, but once she does she dives in with both feet. Brie works very well in the part of a woman desperate to find her place and is adept as the physical comedy, too. Gilpin is solid as Debbie. A respected TV actress who left her soap opera role to be a wife and mother and now finds that home broken by Ruth and that she has a need to be more than a babysitter. Gilpin portrays well a woman with an axe to grind who wants to be star of the show and does so without making her unlikable. Marc Maron is perfectly cast as the somewhat sleazy filmmaker, who does have a heart underneath all that cynicism and sarcasm. He really does good work here at making the guy very likable, even when he’s being a bit of an ass. The supporting cast all are strong, including Sydelle Noel as “Cherry” who becomes the groups trainer, as well as, one of the wrestlers know as “Junkchain” and Britney Young as a gentle giant of a women who only wants to prove she can be a wrestler like her famous father and brothers. A well rounded and well cast group of eccentric and eclectic characters.

So, the show does have a few flaws…and most shows take at least one season to hit their stride…but it overcomes them to become quite engaging. It’s a fun, nostalgic and clever look back not only an era, but one example of that era’s outrageousness. It’s well cast, has some fun moments and mixes the drama and comedy very well nicely. Another fun, entertaining and original show from Netflix! 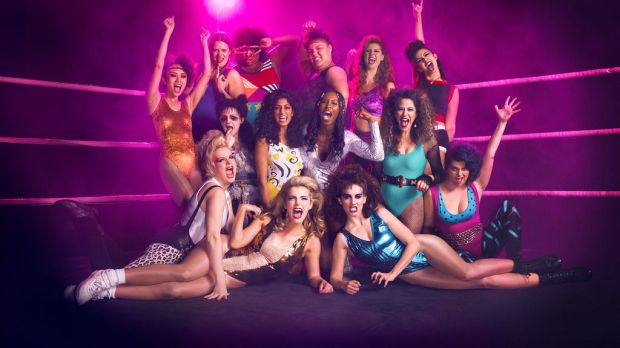 The cast of Glow

Unintentionally hilarious horror stars Alison Brie (Sleeping WIth Other People) as a virginal young woman who is impregnated by a demon at her mother’s funeral…don’t ask. Now as she falls under her unborn child’s evil influence, she goes on a killing spree to supply six victims for it’s birthing ritual.

Low budget horror is as stupid as it sounds and as filled with clichés as you’d expect and gets more and more ridiculous as it goes on. Star Brie recites some side split-tingly awful dialog and goes completely over the top in scenes that are meant to be shocking and scary, but provide rib-tickling laughs instead. The sex scene is worth watching this for alone… you’ll laugh till you cry…as is the scene where her water breaks and it looks like green dishwashing liquid! And the whole thing is meant to be serious! Epic fail for them!…Win, win for us!

Also starring Denise Crosby and genre favorite Kane Hodder who actually looks embarrassed to be in this. Crack open your favorite brew and enjoy this schlock-fest.

Oh…and for those watching for the charming Alison Brie, there’s good and bad news…the Community star does get to kiss another girl and talk hilariously dirty during a sex scene, but sadly uses an obvious body double for the brief nude scenes. Below rating is purely for ‘so bad it’s good’ entertainment value. 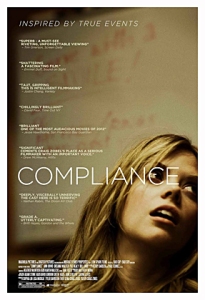 A disturbing thriller based on supposedly true events about a mean spirited prank pulled on the employees of a fast food restaurant. A caller (Pat Healy), claiming to be a police officer, tells manager Sandra (Ann Dowd) that one of her employees, Becky (Dreama Walker) has committed a theft and needs to be searched and detained. The caller asks Sandra and her staff to do increasingly humiliating things to Becky all under the guise that it is part of a criminal investigation and none of them seem to have the courage to question the increasingly depraved acts until it’s too late.

Compliance is a tough movie to sit through and it would be hard to believe that people could be stupid enough to go along with such a horrible prank for as long as they did, except for the fact that it is all taken from a case in 2004 at a Mc Donald’s in Fort Washington, Kentucky. Craig Zobel writes and directs the story fairly straightforward and he gets good performances out of his cast and the result is a disturbing movie that is tough to sit through…even more so, because it actually happened. Not a great film. The aftermath seems rushed after the film took it’s time portraying the events, but it is still effective and fairly well made.

Offbeat romantic comedy tells the story of Lainey (Alison Brie) and Jake (Jason Sudeikis). Twelve years ago they lost their virginities to each other in college and never saw each other again, until reconnecting twelve years later at a meeting for love addicts. Now, despite that neither of them can stay faithful in a relationship, they form a bond which may lead to the thing they both have been running away from since that fateful night…true love.

Writer/director Leslye Headland delivers a rarity, a romantic comedy that is not only cleverly funny and delightfully raunchy, but has some very heartfelt emotions that are never intrusive or overbearing. The film tries to avoid many of the clichés we are used to seeing in the more mainstream rom-com flicks and when it can’t, it uses them in a fresh and offbeat manner. Best of all, it is raunchy as can be, but unlike most flicks these days, there is some definite wit behind the raunch and thus it rarely, if ever, slips into the just plain vulgar, like so many other flicks fall right into. It gives us two very eccentric, troubled but very likable characters in Lainey and Jake and we are rooting for them to finally get together as we watch them avoid the inevitable, by continuously entering in relationships that aren’t right for them. The banter between Sudeikis and Brie is really crisp, funny and very well written and the delivery by both actors is impeccable. There is also a genuine heart to this flick that makes it work so well without ever getty sappy or overly sentimental. Sure it stumbles a bit in the last act, but regains it’s footing and gives us a satisfying conclusion fitting the eclectic characters.

This brings to the forefront the skilled cast that Headland has assembled. Community‘s Alison Brie is endearing as sweet but, very love-challenged Lainey who avoids risking her heart by pursuing a man (Adam Scott) with his own commitments. Sudeikis is really good as the kind-hearted ladies man, Jake, who avoids putting his heart at risk by sleeping around and breaking off anything that starts to resemble a relationship. He has some really clever dialogue and delivers it masterfully and has a nice self deprecating humor that keeps the character humbled despite his numerous conquests. He and Brie have a great chemistry together and their conversations are engaging and often hilariously dirty. There is also a definite spark between the two stars and you can see their feelings bubbling beneath all the evasiveness and denial. There is also top notch support from Amanda Peet, Adam Scott, Natasha Lyonne and Marc Blucas as the various people around our leads. All slightly eclectic characters that refreshingly avoid the stereotypes that usually populate these movies.

I really enjoyed this flick. Not only was a it an engaging romance, but was delightfully offbeat, cleverly written and very raunchy and funny. It had a sweet love story at it’s core surrounded by some eccentric but endearing characters. Filmmaker Leslye Headland gives some needed wit to the dirtier material and gets great chemistry and performances out of her cast. She also films New York with a loving lens and it makes you fall in love with the city, as well as, the characters she’s let loose inside it. A really entertaining indie romantic comedy.