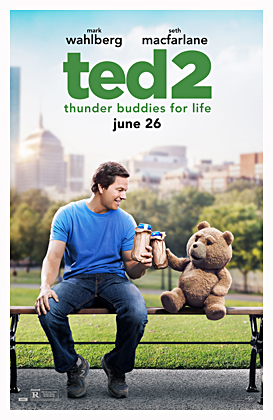 Not being a fan of Seth Macfarlane’s Family Guy, I was pleasantly surprised by his 2012 talking teddy bear comedy Ted. It’s not a great movie by any stretch but, it was actually very funny at times and had a surprising amount of heart. The film was a huge hit and now the ‘Thunder Buddies’ are back!…and if you liked Ted, I find it hard to believe you won’t like this.

Ted 2 opens with the self-aware bear marrying his girlfriend and fellow cashier from work, Tami-Lynn (Jessica Barth), while John (Mark Wahlberg) is still suffering from the effects of his divorce from Lori. The film then jumps a year later where the honeymoon is over and Ted and his bride can’t get along. Taking advice from a co-worker, Ted decides the best way to fix the marriage is by having a baby…something he is physically incapable of doing. At first…in a hilarious series of segments…he tries to get a sperm donor. When they find Tami-Lynn barren from all her years of drug use, they try to adopt. Ted, though, is viewed by law as an object and therefor not eligible to adopt. Ted and John must now, somehow, get the courts to acknowledge Ted as a living person and so, they hire pretty, young lawyer Samantha (Amanda Seyfried) to try to prove it. Meanwhile, Donny (Giovanni Ribisi) is back and with the help of a toy company CEO, plots to see Ted’s efforts fail so they can have the talking bear in their clutches without consequence.

Macfarlane is back in the director’s chair and once again co-writes with Alec Sulkin and Wellesley Wild. The result is pretty much the same with a plethora of toilet humor, stoner jokes and pop culture references which play out during the thin excuse for a plot. Not every joke or bit works, but, a lot do and the film still has far more heart than you would expect in a low brow comedy. There are some truly funny gags here…one involving Ted and John in a fertility clinic is particularly hysterical…and some very amusing cameos…such as a side-splitting Liam Neeson. Macfarlane even teases star Amanda Seyfriend about her large expressive eyes with a couple of Gollum references and the actress gets ‘good sport’ points for going along with it all the way. If nothing else, the finale set at New York City Comic Con is worth seeing this alone for, especially if you’re a geek and get all the references and costumes that get dragged into the mayhem. Sure the flick is far from perfect with a weak story, a strong predictability…John and Samantha, like we didn’t see THAT coming…and some very cliché situations but, the characters of John and Ted are endearing as ever and it’s their antics we came to see and Macfarlane delivers more often than not. At the very least this sequel is an equal and that’s good enough.

Obviously, the cast helps makes this work and some surprising faces get to show they have a sense of humor and can take a joke. Wahlberg is once again fun as simple working guy John Bennett. His phony Boston accent and surprising comic timing make him a good team with Macfarlane’s vocalization of the smart-ass, foul-mouthed, CGI Ted. Two friends who refuse to grow up and there is a chemistry between the performers that really makes the pairing special, even when the jokes fall flat. The biggest surprise here is Seyfried. I am a fan of the actress and was delighted to see that she not only can play low-brow comedy but, she plays it very well and fits right in with the boys. She not only is very funny but, also appears to be a good sport with the Gollum jokes and keeping a straight face when smoking an interestingly shaped bong. She has a flare for comedy and Macfarlane smartly let’s her cut loose in contrast to the more straightedged Lori (Mila Kunis) in part one. Ribisi is slimy and creepy again as Donny and we also get fun appearances from the likes of Morgan Freeman and a returning Sam J. Jones and Patrick Warburton in smaller roles…and some very funny cameos from an assortment of familiar faces including some Star Trek alumni.

Normally I am not a fan of Macfarlane’s humor but, something about the characters of John and Ted and the predicaments they get into are endearing and sometimes, just really funny. Sure the humor is beyond raunchy and Macfarlane and his co-scripters leave nothing sacred…a Ferguson, Missouri crack had the audience groan in shock… but, that’s kinda why we see these movies…to see how far they’ll go. Raunchiness like this needs humor and wit behind it, though…which was missing in Macfarlane’s A Million Ways To Die In The West…to really work. For the most part, Ted 2 has some definite cleverness in the toilet humor and some rebellious audacity, too. Not every joke is funny…again, the Ferguson reference…or every slapstick sequence a knee-slapper, but, the film succeeds far more than it fails and despite being about an animated teddy bear, that bear does have a heart buried under all the bodily fluid references.