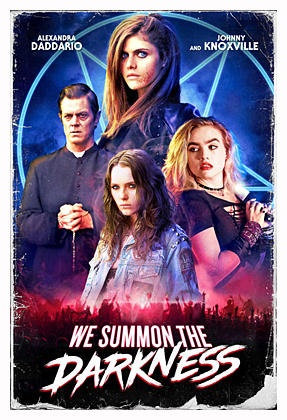 Horror/comedy takes place in 1988 with three hot friends, Alexis (Alexandra Daddario from Bereavement), Val (Maddie Hasson) and Beverly (Amy Forsyth from Hell fest) traveling to a heavy metal concert at a time where there is a series of murders being committed, allegedly by a satanic cult. There they meet three guys, Ivan (Austin Swift), Kovacs (Logan Miller from Plus One) and Mark (Keean Johnson from Alita: Battle Angel) and the six bond. After the concert, they return to Alexis’ father’s remote house to party. As this is a horror film, one of these trios is not what they seem.

We Summon The Darkness is directed by Marc Meyers from a script by Alan Trezza. Sadly, it doesn’t have nearly as much fun with it’s premise, as it let’s the proverbial cat out of the bag less than halfway through. This sets up a stalemate situation with the survivors of one group trying to hold off the others. It’s not nearly as fun as if they had kept it a mystery as to which group were killers and which were victims, for a while longer. The middle of the film finds it’s momentum stopped dead as a siege situation is set-up, with two survivors locked inside a pantry. Of course a comedy of errors threatens to unravel the plans of the killers, leading to more bodies piling up. The tone is a bit uneven, as it can’t decide whether it wants to be a straight-up horror film, or is it supposed to be more of a comedy. The tone is fairly light at times, but it then switches to straight up horror, especially in the last act and there is a lot of blood spilled and graphic violence throughout. Again, the makers never seem to decide on a consistent tone and that keeps the audience at a bit of a distance. Plus, it’s not funny enough or scary/intense enough to be fully successful at either genre and it doesn’t mix them as deftly as it needs to. To describe the cast and characters in detail would be to give surprises away, so suffice to say the cast are all good and perform their parts well. Eventually things do pick-up, as a not surprising change of heart leads to evened odds and an all-out battle for survival in the final third. The climax is effective, if not predictable. Reminds one of last year’s Satanic Panic, another satanist themed horror/comedy that also had trouble settling on a consistent tone and didn’t take full advantage of it’s premise.

This isn’t a great movie and could have been a lot better. It’s not terrible, just doesn’t have as nearly as much fun with it’s premise as it could have. The middle of the flick stagnates, thought it does pick up for a bloody cat and mouse climax. It is also tonally challenged, as it can’t decide between comedy and straight-up horror or at least mixed them more successfully. Could have been a lot better, but could have been a lot worse. Basically a missed opportunity to have a lot of fun. Also stars Johnny Knoxville as a TV preacher, who turns out to be close to one of the six characters and Allison McAtee and Tanner Beard as an ex-stepmom and police officer, respectively, both in the wrong place at the wrong time.

Flick is available to stream on Amazon Prime.

After the smash success of Paranormal Activity, Oren Peli returned to the director’s chair for his sophomore effort in 2009…and the movie has since languished in post-production hell for the last six years…now we know why. Found footage flick has a silly plot with three young friends (Darrin Bragg, Reid Warner and Ben Rovner) concocting an absurd scheme to break into the infamous Area 51 military base. They have the help of a former employee’s daughter (Jelena Nik) and succeed where many have failed.

Obviously, they are not happy with what they find…and neither are we. Flick takes a ridiculous 70 minutes for anything interesting to happen and at about 95 minutes long (including it’s slow crawl credits) that’s simply too long to wait. What we do get is amusing, but exactly what you’d expect to get in a flick about Area 51 and it’s fleetingly glimpsed and over far too quickly. There is barely anything resembling scares or suspense and what we do finally encounter is very predictable and been done before, especially in the X-Files…and done better. Area 51’s actual secrets may still be a mystery, but why this flick sat for six years and was quietly dumped onto VOD and home media, isn’t.

Director Joe Dante (The Howling, Gremlins) has made quite a few classic films, which is why it’s disappointing that his latest effort is so sadly mediocre. Story has horror movie fan and slacker Max (Anton Yelchin) dating the hot but extremely bitchy, Evelyn (Ashley Greene), while he could be with the sweet, horror movie-themed-ice-cream-shop owner, Olivia (Alexandra Daddario). The wrong words said in front of the wrong magic item in the shop Max works at, ensures he will be with Evelyn forever…even when she is hit by a bus and killed. Now, as he desperately wants to date Olivia, Max’s girlfriend is back and there’s going to be trouble.

Flick’s problems lie in it’s uninspired and sadly unfunny script by Alan Trezza. Dante tries to give it some life and it is colorful and filled with the horror movie references and imagery Dante excels at, but the script is unimaginative, predictable and let’s Dante down at every turn. The premise has been done before, but still could have made fun use of it’s scenario, instead it is routine and without the wit to really make this a good time. At least Dante get’s good work out of the cast as Yelchin, Greene and Daddario…who is especially endearing as the ultimate horror geek girlfriend fantasy, Olivia…do their best to get something out of their thinly written parts. With a better script this could have been a real treat as it had a great director! 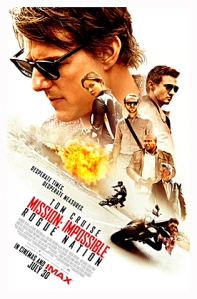 I originally was not a fan of this series, but to be honest, each installment has been an improvement over the last with this and the previous installment, Ghost Protocol, being a lot of fun. Dare I say this series has finally hit it’s stride with it’s fourth and fifth entries. This chapter finds the IMF being dissolved by the government right in the middle of Ethan Hunt’s (Tom Cruise) mission to track down “The Syndicate”, an organization that is the IMF’s equal, yet dedicated to disruption and terrorism. Now considered a rogue agent and being hunted around the world, Hunt must team with Benji (Simon Pegg), Brandt (Jeremy Renner), Luther (Ving Rhames) and mysterious agent Ilsa Faust (Rebecca Ferguson) to bring the syndicate down.

As written and directed by Christopher McQuarrie, Rogue Nation is fast-paced and entertaining with some great camaraderie between Cruise and his team, especially Pegg. There are some fun action sequences and some thrilling escapes with the usual espionage and covert operations mixed in. The only thing holding it back a little, is that the action is nothing out of the ordinary, despite being well-staged and the main villain (Sean Harris) is rather weak. Otherwise this is a fun spy/action flick and Swedish actress Ferguson gets to steal a few scenes from Cruise…which isn’t an easy thing to do. Also stars Alec Baldwin as a CIA thorn in the IMF’s side. Fun!