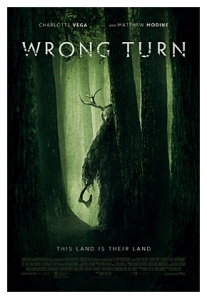 Flick is less a remake, reboot or re-imagining than basically just a woods set movie using a familiar title. The story opens with a concerned father (Matthew Modine) entering a small, rural, mountain town to find his daughter Jen (Charlotte Vega), who has gone missing. We then travel back six weeks to find Jen and her five friends (Adain Bradley, Emma Dumont, Dylan McTee, Adrian Favela and Vardaan Arora) in that same town and having a bit of a problem with some locals in a bar. While camping the next day, the group fatally encounter traps in the woods and soon a group of animal pelt and skull wearing people. In a mistake of intent, they kill one and now they are taken prisoner by “The Foundation” a society of pagan-like mountain folk who don’t tolerate intruders and want to put them on trial for their crime…and then it gets weird.

New franchise flick is directed by Mike P. Nelson (The Domestics) from a script by original Wrong Turn writer Alan B. McElroy. To sum it up, it’s as if M Night Shyamalan directed a backwoods set The Hills Have Eyes only with weird Nordic Pagans instead of redneck cannibals. Those expecting our obnoxious city folk to become happy meals, will themselves be a bit unhappy. There is still some very gruesome violence, as some of the group pay dearly for their transgressions on Foundation land. This is also where it takes a Shyamalan twist…and looses it’s grip…as the survivors are forced to make a choice of a horrible fate called “darkness” or join The Foundation. We then travel forward six weeks with Jen’s dad (Modine) going after The Foundation to rescue his daughter. It gets even weirder here, but also falls apart, as it’s just too ridiculous for it’s own good. There is a lot of bloodshed and it comes to a screwed up ending, that extends into the end credits. After what we’ve sat through, though, why not? Overall, there is an appreciation for trying something new and there are some effective moments and some disturbing ones. The cast perform well and Vega makes a solid heroine, but maybe it’s a bit too M. Night (circa The Village) when it could should have stayed more Tobe Hooper (circa Chainsaw).

The original Wrong Turn is no classic, but is a solid entry in the “inbred cannibals in the woods” horror sub-genre. It is derivative of Texas Chainsaw Massacre and Hills Have Eyes, but is well done and suspenseful enough to work despite being very familiar. The story has med student Chris (Desmond Harrington) driving through West Virginia and taking a back road to get to an interview after an accident clogs up the highway. On this dirt road he literally runs into five hikers whose vehicle has been disabled from some suspiciously placed barbed wire across their path. He, engaged couple Carly (Emmanuelle Chriqui) and Scott (Jeremy Sisto) along with tough girl Jessie (Eliza Dushku) head out to find help while stoners Francine (Lindy Booth) and Evan (Kevin Zegers) remain with the wrecked cars. It’s not spoiling anything to say that soon our attractive young city slickers encounter some deformed and very hungry inbred mountain folk and are running for their lives through the dense woods.

Wrong Turn is by no means original, but director Rob Schmidt is able to take Alan B. McElroy’s familiar script and create a well made and suspenseful horror/thriller out of it. Part of the reason it works is that he gets good performances out of his cast and they create very likable characters and so we care about what happens to them and some of them do meet gruesome ends. There are some gory deaths, as expected in a flick like this, that are not only well executed by the FX team, but since the victims are very likable and the villains very deserving of what’s coming to them, it adds to their effectiveness. While we never get to know the cannibalistic hillbillies here, like we do in the previously mentioned Hooper and Craven classics, they are quite formidable and lethal and they get the job done as far as being effective bad guys. The script also does set up some nice suspenseful situations to put our likable characters in, such as a chase through the upper branches of the dense forest and a really tense sequence early on with our young protagonists caught in the carnivorous country folks’ home.

So basically a good cast and a good director are able to take a familiar story and turn it into a good “Saturday night on the couch” horror flick and sometimes that’s all you want and need. Not quite a classic, but a well made horror that’s simple, back to basics and gives us enough of what we want from a modern horror flick to earn it a spot on the Halloween season view list.