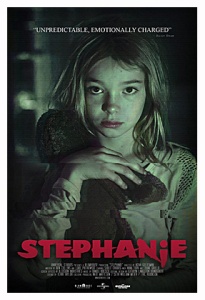 Something strange is happening in the world and it has left little Stephanie (Shree Crooks) all alone in her house. She’s surviving the best she can and is trying to stay clear of what she believes is a monster living in the woods outside. When her military parents (Frank Grillo and Anna Torv) suddenly return home, dad starts building an immense wall in the backyard and mom starts doing research on a strange phenomena affecting the brain. What are her parents trying to protect Stephanie from?…or is it Stephanie from whom they need protection?

Flick starts out like Home Alone meets A Quiet Place, but evolves into something different, though not totally unexpected. It is effectively directed by Akiva Goldsman from a script by Luke Piotrowski and Ben Collins that has some clever spins on situations we’ve seen before. The opening of a little girl trying to raise herself in a house with only her stuffed turtle, Francis and the corpse of her dead brother, Paul (Jonah Beres) to keep her company, is unsettling enough. When her folks mysteriously show up, things starts to really get strange. Sure, ultimately it’s just a variation of the creepy kid sub-genre, but a fairly clever one and it has some very disturbing sequences, especially in the last act when we finally discover what is actually going on. The small cast are very good, especially young Miss Crooks as Stephanie, who can be quite cute, or quite chilling, depending on the situation. At it’s core it may not be all that original, but it presents it’s premise with some interesting and creepy touches and ends on a chilling note. Definitely worth a look!
-MonsterZero NJ