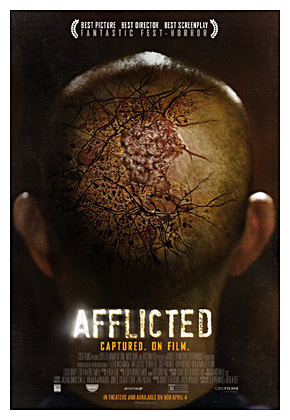 Afflicted is a Canadian found footage horror flick directed and starring Clif Prowse and Derek Lee, that cleverly documents a young man’s transformation into a monster and while the film isn’t always successful in what it sets out to do, it is still very effective and also one of the more intimate examinations of what it’s like for an average person to turn into a creature of the night.

The story has two friends, amateur filmmaker Clif (Clif Prowse) and IT man Derek (Derek Lee) planing a year long trip around the world despite Derek’s recently being diagnosed with cerebral arteriovenous malformation. Clif plans to document their travels for a web series/travel blog and thus his camera follows them every step of the way. But, an experience of a lifetime soon turns into a nightmare as Derek is attacked in Paris by a girl named Audrey (Baya Rehaz) whom he takes back to his room from a party. Bloodied and left with some nasty wounds, Derek can’t remember what happened but, insists he’s fine and he and Clif continue on with their trip only to discover that Derek is starting to change. He can’t eat and he starts to blister and burn violently when out in the sun. But, he also has increased strength and enhanced agilities, too. Clif continues to document as it becomes apparent his lifelong friend is changing into something unearthly, not realizing that it puts him in mortal danger as it appears Derek can only now feed on blood… human blood.

I’ll start out by saying that this flick does have a few flaws that hold it back a little but, gets a lot more right than it does wrong. Prowse and Lee start out the film with a lighter tone. An almost party/road trip atmosphere then it starts to turn darker and more grim as Derek gets ravaged and starts to change. The changes are subtle at first but, gradually get worse as Derek seems to sicken and yet get stronger by the day. The found footage format works really well as we follow Derek on his path of transformation and discovers both his new strengths and weakness, such as his aversion to sunlight and food. There are some very creepy sequences as the condition worsens and Derek and Clif begin to realize Derek is becoming a creature of myth… and a dangerous one. Sure we’ve seen this before but, the film is successful in presenting the negative effects of his transformation and the emotional turmoil that comes with it. It is only when he is reveling in his new strengths that things get a bit borderline silly and it evokes scenes from Chronicle and Paranormal Activity: The Marked Ones and changes the tone of the film a bit from the more smoldering intensity of the negative aspects of Lee’s change. The flick also switches gears a bit about halfway through as Derek decides to hunt Audrey down and get answers, while being pursued by Interpol… as let’s just say he’s been very bad. When it becomes more of a hunt/chase film, it is still entertaining but, changes tone a bit and is not nearly as gripping as us watching him transform and feeling his pain and experiencing the increasing danger Clif may be in. His encounter with Audrey also gets a bit over-the-top as compared with the more grounded moments earlier on but, still presents an interesting twist on a very familiar horror story as Derek must now face that he is a monster. For the most part though, the film works and Prowse and Lee have some potential as filmmakers and the horror elements of the flick work a lot better than when it veers into the superpowers elements… though those have their entertainment factor too, as it is part of a very familiar type of horror character. The film has some nice atmosphere and the cinematography by Norm Li is well shot and without loosing the found footage feel. The portrayal of some of the more fantastic elements of Derek’s transformation, such as his augmented strength and agility, are well staged and help keep them from crossing the line into silly.

As for the cast… It’s basically a two man show with Prowse and Lee playing ‘themselves’ and they are fine as they come across as real people and Derek Lee actually portrays his torment and confusion quite well and can be scary when he wants to be. Prowse comes across a caring friend and inquisitive filmmaker but, also someone who may be too close to the situation to realize how dangerous things are getting. Baya Rehaz is effective as Audrey and gives her character a presence in her brief screen time and appears quite formidable and yet not entirely inhuman when Derek tracks her down for their climactic confrontation in Paris. The scene goes over-the-top a bit but, overall works.

I liked this flick and with the found footage format at a point where it’s starting to wear out it’s welcome, it is a novel use for it that puts an interesting spin on a very familiar horror story. The horror elements of this story work far better than the more over-the-top elements and the shift in tone when the film changes story focus at halftime isn’t as involving as what came before but, isn’t a failure either. Prowse and Lee show some real promise as filmmakers and overall this was a refreshing twist on a an overly saturated horror sub-genre and manages to give this somewhat neutered horror staple back a little bit of it’s teeth. Watch through the credits for a chilling epilogue.

WARNING: this trailer shows A LOT…