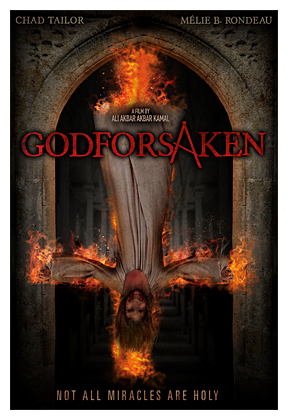 When documentary filmmaker Chad (Chad Taylor) returns to his hometown for a funeral, he gets an unexpected opportunity to make a new documentary, when the dead girl Lisa (Mélie B. Rondeau) rises from her coffin. He returns with his crew to find out the truth of what has happened, but his dream documentary may become a nightmare the more he and his friends investigate.

Found footage horror is written and directed by Ali Akbar Akbar Kamal and the flick is far more silly than scary. Lisa’s resurrection is seen by some as an act of God and once she starts to perform miracles, the religious community is convinced her actions are divine. One can appreciate the attempted commentary here, but the awful acting and silliness of the proceedings ruins any impact the film strives for. As found footage, it never feels like we’re actually watching real footage as the goings on are too hokey to be taken seriously or seen as anything other than a movie…and a disappointingly bad one at that. Obviously, our crew starts to see that something more sinister than saintly is at work here, but as the events become more obviously evil, the film just gets sillier and sillier till it’s ludicrous finale. Also, at only 75 minutes long, the film still feels tedious, like a TV show episode dragged out to almost feature length. Other cast members include Katie Fleming, Chris Kelly, Domenic Derose, Nicole Fairbairn, JoAnn Bundock, and Flora Burke. Film will be available this Friday 3/25/22 on The Terror Films Channel and on other VOD outlasts 4/8/22.