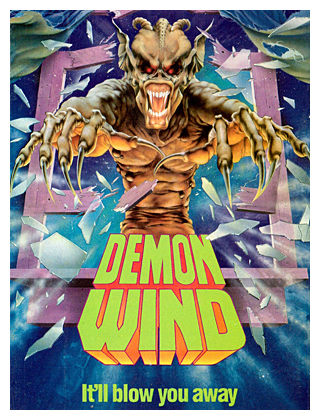 Demon Wind may have been released in 1990 but it was filmed in 1989 and is an 80s horror to its gory core. Nonsensical plot has Cory (Eric Larson), triggered by his father’s suicide, journeying to his family’s abandoned farm to find out what happened to his grandparents, who disappeared sixty years earlier. Along for the ride is girlfriend Elaine (Francine Lapensée) and some friends, who soon find themselves besieged by a hoard of demons and one by one start to become demon possessed themselves.

Hilariously 80s flick is written and directed by Charles Philip Moore with a heavy dose of Evil Dead envy. This flick has everything you’d need in an 80s demonic themed horror, including rubber monsters, lots of prosthetic gore, bodily fluids, boobs and a group of attractive twenty-somethings to fall victim to the ancient forces of evil. It is a delightfully cheesy horror, with equally cheesy animation FX, and hilariously awful acting all across the board. The make-up FX are charmingly rubbery, and the film gets more and more preposterous as it goes along. There is a very 80s electronic score by Bruce Wallenstein and the farmhouse location in Thousand Oaks, California is very effective despite all the silliness. It’s goofy, gory and with the right beverages, can be a real hoot of an 80s good time!

Overall, this is not a good movie on traditional levels, but is a delightfully blood-spattered cheese-fest on another. Bad acting, rubber make-up, a nonsensical plot and plenty of colorful creatures, gore and animation FX, make this a fun midnight movie for fans of 80s horror at it loopiest. This was a first-time watch and MZNJ is delighted to now be acquainted with this cult classic horror. Flick is available in a Blu-ray/DVD combo from the awesome folks at Vinegar Syndrome!

Rated 3 (out of 4) delightfully rubbery demons!