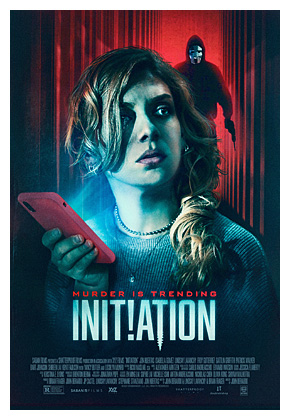 Initiation is another horror with a message about inappropriate sexual behavior towards women. The slasher focuses on a college campus where girls thought to be promiscuous are marked in texts with exclamation points by predatory males. Pretty Kylie (Isabella Gomez) finds herself waking up in a male student’s bedroom after passing out during a homecoming party and not sure of what happened to her. Soon, one of the boys possibly involved, star student Wes Scott (Froy Gutierrez), is brutally murdered. While Kylie struggles with what happened to her and Wes’ sister Ellery (Lindsay LaVanchy) struggles with the murder of her brother and what he’s accused of, a mirror masked killer begins stalking and murdering students.

Flick is stylishly directed by John Berardo from his script with Brian Frager and star LaVanchy. It finds inspiration not only from contemporary themes from the #metoo era, but classic slashers like Scream, and it’s visual style, with it’s mirror masked face killer and bold neon colors, hinting Berardo may have been a fan of Dario Argento, as well. The kills are quite vicious and there is some graphic bloodshed, as the stalker uses various tools to savagely kill his or her victims. It’s a very somber slasher for it’s first hour with it’s gruesome kills few and spaced out, while focusing on the emotional turmoil of both Kylie and Ellery. It cranks up the intensity for it’s climax, where we get a reveal which works in context of the story, though isn’t a complete surprise, as, at this point, there are not too many suspects left. Overall, this is an effective and stylish slasher with a more moderate pace, until the last act, which deftly applies some very topical themes with it’s subtext of young women being taken advantage of and more concern show for the victimizer than the victim. Worth a watch on streaming outlets like Amazon Prime and has a good cast that also stars veteran actress Yancy Butler, as a police detective and horror vet Lochlyn Munro (Freddy vs. Jason), as the university chancellor, who may be more concerned with reputations than justice.