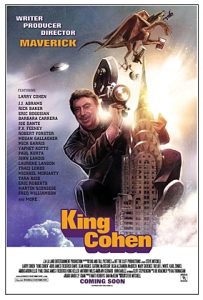 Documentary traces the life and career of maverick filmmaker Larry Cohen from his beginnings in TV to some of his film classics and cult classics.

Fun and informative documentary is written and directed by Steve Mitchell and tells Cohen’s story with the words of the man himself and many who worked with him. It covers his start writing for television shows like The Fugitive and The Defenders, to the creation of his first TV show Branded and his now classic sci-fi TV show The Invaders. Larry and guests then relate his decision to make his own movies and the start of a legendary B-movie, film career, from his first feature Bone, to his Blaxploitation hits Black Caesar and Hell Up In Harlem, to his classic horrors It’s Alive, Q:The Winged Serpent and The Stuff. Along the way we get some great stories and anecdotes on Larry’s guerrilla style of filmmaking from Cohen and the many talents who worked in front of and behind the camera with him. Filming in famous places without permits, making actors do their own stunts, having New York’s S.W.A.T. team converge on one of his sets and turning gang members and everyday folk into actors, is all told to us, the eager audience. It’s a lot of fun and weaves a story of a man determined to do things his way…and he did! Larry sadly left us in 2019, but his film legacy lives on and this documentary is a nice companion piece to his many classic films. Flick is currently streaming free on Tubi.