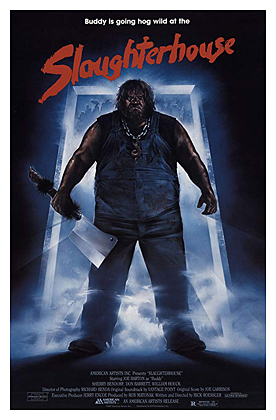 Slaughterhouse is a late 80s backwoods horror that has severe Texas Chainsaw Massacre envy. Flick finds the slaughterhouse of one Lester Bacon…that’s is his actual name here…falling on hard times and falling into disrepair. Lester (Don Barrett) blames his attorney (Lee Robinson) and former partner (Tom Sanford) for betraying him to get his land. Along with his dim-witted and deranged, mountain-man of a son, Buddy (Joe B. Barton), Lester plans to kill those seeking to buy him out to save the only way of life he knows. Bonkers Buddy is way ahead of him, as he gleefully murders anyone who trespasses on the property. As Lester and Buddy started carving their way to revenge, a group of teenagers, including the sheriff’s daughter (Sherry Bendorf), decide to pay the spooky old slaughterhouse a visit.

Flick is written and directed by Rick Roessler and is his only movie. He tries to recreate the off kilter tone of Tobe Hooper’s classic and give it that same undercurrent of dark humor, but it just comes off as goofy at times. The acting, from a cast of unknowns, is pretty poor, as is the dialogue and all of the teenagers here look like they are in their 30s. On the plus side, the run-down slaughterhouse location is effective and there is plenty of well executed gore, as Buddy and his Pa rack up quite a body count. There is no suspense or scares and Buddy and Lester are more comical than scary, with Barrett’s overacting as Lester and Barton’s dialogue basically being exaggerated pig noises. There is some entertainment value to all this, though for all the wrong reasons. Despite the film not being well received upon it’s limited release, it has garnered an affectionate cult following, in all the years since and has had a couple of respectable blu-ray releases in recent years.

Overall, this is not an outright classic by any means, but is now considered a cult classic by some. It is not a good movie, per say, but there is entertainment to be had in the gory kills, hilarious overacting, goofy dialogue and unintentionally silly situations. It definitely used Texas Chainsaw Massacre as a template, but Tobe Hooper has nothing to fear…and neither do we…as scares is one thing this silly flick doesn’t evoke. Worth a watch for 80s completists and can be fun with a few brews to accompany it. Currently streaming free on Tubi, if you want to give it a look and available on blu-ray from Arrow Video.