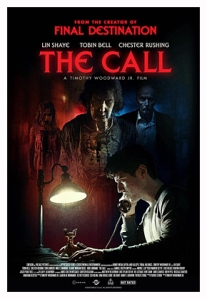 Flick takes place in 1987 and finds new kid in town, Chris (Chester Rushing) falling quickly for pretty schoolmate Tonya (Erin Sanders). When hanging with her friends, tough guy, Zack (Mike C. Manning) and his brother, Brett (Sloane Morgan Siegel), they find themselves assailing the house of Edith Cranston (horror legend Lin Shaye) with rocks and vulgarity. Edith Cranston is a former day care operator suspected of being a witch and Tonya blames her for the disappearance of her little sister, Laura (Brooklyn Anne Miller). The confrontation leads to Edith committing suicide and shockingly, the four youths are included in her will. At her home, husband, Edward (Tobin Bell), explains that to claim their inheritance of $100,000 each, they must simply go upstairs, one at a time, and answer a phone call. The call however turns out to be a nightmare for each, one they must endure, or loose the money and maybe their lives.

Film is directed by Timothy Woodward Jr. from a script by Patrick Stibbs. He directs well enough and the film has a spooky visual style, but it’s in the story where it stumbles. The set-up works fine enough and even the oft-used element of having one face their greatest fears, darkest secrets, inner pains, can still be done effectively, but here it’s not. None of what the four go through is particularly interesting. Having Zack and Brett being brothers, the two face exactly the same fear, their abusive, alcoholic father (Judd Lormand), so we get the same scenario played out twice. It’s repetitive and lazy. Chris’s ordeal is nothing new, or done all that interestingly and let’s just say we can easily guess what Tonya’s dark secret is, long before it’s revealed. On top of that, the 80s setting has literally no bearing to the story. What was the need to set it in the 80s and then have it take place inside the same house almost the entire film? The cast are all fine, especially a chilling turn from veteran Shaye, and the production looks good with some nice atmosphere. It’s just that after an intriguing set-up, the flick drops the ball in following it up with something equally as interesting, scary, or at least, less routine and predictable. A disappointing example of having a good premise and cast, but going nowhere with them.