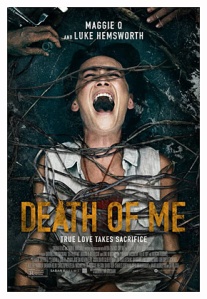 Dull supernatural thriller finds husband and wife Neil (Luke Hemsworth) and Christine (Maggie Q) on a trip to a small Thailand island. They wake up with no memory of the night before and a cellphone video shows them partying with Neil then raping, killing and burying Christine. The couple set off to find out what really happened and soon Christine finds herself a target of ancient island traditions and supernatural forces.

Flick is directed very by-the-numbers by Darren Lynn Bousman, from a dull script by Arli Margolis, James Morley III and David Tish. The movie has little or no suspense, or scares and the supernatural imagery and entities are very routine and very familiar. With the tropical far east setting, folklore and culture there was potential to do something spooky and interesting, but both writers and director take the easy way out on all counts. Maggie Q tries hard as heroine Christine, but the rest of the cast seem to be performing on a paycheck level. Dull and uninteresting with even the last shot in the movie being predictable. Also stars genre favorite Alex Essoe as the owner of the villa Christine and Neil are staying in and Kat Ingkarat as a mysterious island woman. Don’t bother unless a big fan of Bousman, Maggie Q, or Alex Essoe.