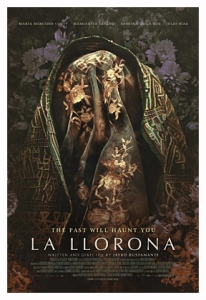 Shudder original is a Guatemalan film that mixes the supernatural with some all too real events from Guatemalan history. The film opens with elderly Enrique (Julio Diaz) on trial for war crimes he’s accused of committing as a general during the bloody Guatemalan Civil War. Events surrounding the trial have he and his family trapped inside his home, with hundreds of angry protestors outside. When new housekeeper Alma (María Mercedes Coroy) is brought into the house, strange things start to occur and soon it appears something more dangerous than the angry mob outside, is now inside the home with them. What is it and what does it want?

Guatemalan tale of a vengeful spirit is directed by Jayro Bustamante from his own script with Lisandro Sanchez. It ‘s a very atmospheric and spooky film on one side and some stark commentary on Guatemala’s bloody history of internal war and genocide on the other. The film is very moderately paced and while there is plenty of supernatural activity going on, it does seem to lean more towards drama, as the family is forced to look at it’s part in some horrific events. When the spooky stuff comes, it is quite effective and Bustamante not only presents some chilling visuals, but achieves his effectiveness with simple in-camera lighting and shot composition. There are no CGI phantoms here, just good old-fashioned filmmaking. The cast are all very good and the Latin folklore adds even more atmosphere to an already atmospheric film. An effective movie that chills both with the supernatural and with the evils that men do. Now streaming on Shudder and costars Sabrina De La Hoz as Enrique’s daughter Natalia, Margarita Kenéfic as wife Carmen, Ayla-Elea Hurtado as granddaughter Sara and María Telón as Valeriana, a housekeeper and possibly illegitimate family member. Definitely NOT to be confused with last year’s lackluster Conjuring Universe flick, The Curse of La Llorona.