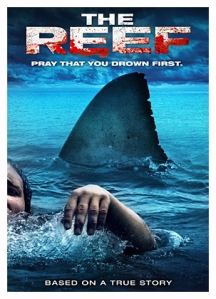 A simple setup has five friends, Luke (Damian Walshe-Howling), Suzie (Adrienne Pickering), Matt (Gyton Grantley), Kate (Zoe Naylor) and Warren (Kieran Darcy-Smith) on a yacht that hits a reef, damaging the hull. As the boat sinks, they must decide to either stay with the wreckage and hope they are found, or make a desperate swim to an island through miles of shark infested waters.

The film is supposedly based on a true story and writer/director Andrew Traucki takes this simple setup and puts his audience right there in the water with his characters, treating us to some thick tension and nerve-wracking suspense. The characters are likable, so we care about their safety and that adds to that tension. We are also treated to some well staged jump scares, between the scenes of shark attack, just to make sure we don’t relax, just as the characters never do. Obviously, we know not everyone is going to make it and that adds tension, too. The cast are all good in their parts, though some might be disappointed at the limited carnage for a shark movie. A pleasantly surprising and effective nail biter from Down Under that disappointingly went straight to DVD outside it’s native country. Too bad, as the 47 Meters Down movies proved successful recently, this might have also been a sleeper hit. Flick is currently streaming free on Tubi!