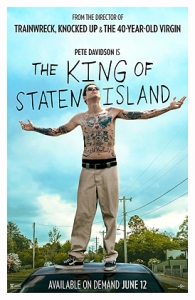 Scott Carlin (Pete Davidson) is a twenty-something stoner/slacker who sits around smoking pot every day with his friends, doesn’t work and still lives with his widowed mother, Margie (Marisa Tomei). Scott’s life of complacency is about to change, however, as his mom starts dating divorced fireman Ray (Bill Burr), his caring sister, Claire (Maude Apatow) moves out to attend college and his “girlfriend,” Kelsey (Bel Powley) is putting pressure on him to be an actual boyfriend. Is it time for Scott to get a life, or will he find some way to keep his current lifestyle of smoking weed and giving his friends tattoos of questionable quality?

Film is directed by Judd Apatow from his script co-written with star Pete Davidson and David Sirus. It is supposedly based somewhat on Pete Davidson’s life growing up in Staten Island and loosing his fireman father at a young age. It’s one of Apatow’s better films in some time with a nice, even mix of drama and comedy and a really solid cast. Davidson is charming and funny as the Scott, who’s got a good heart, but zero ambitions, aside from his dream to open a tattoo parlor/restaurant. Still hurting over the on-duty death of his his fireman father, there is reasonable turmoil when his mother starts dating another one. Davidson plays that well, too. Scott has to make some strong decisions when thrown out by his fed-up mother and everyone around him is either moving on with their lives, or getting themselves into trouble. Apatow directs very low-key and uses the Staten Island locations to charming effect and the film is never boring at 136 minutes. The cast are all great, with Tomei giving another culturally flavorful performance and SNL alumni Pete Davidson proving he can carry a film. After a few stumbles, this and Trainwreck prove Apatow’s back to form.