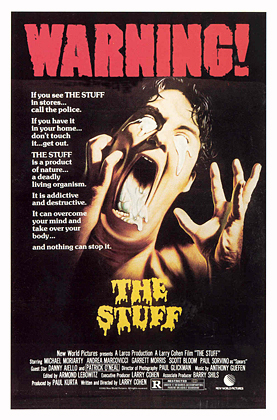 Horror comedy finds a new dessert taking the world by storm. The devastated ice cream industry hires industrial spy Mo Rutherford (Michael Moriarty) to find out what this mystery treat actually is. What Mo discovers is more horrifying than he could ever have imagined, as The Stuff is a living organism that bubbles up out of the ground and takes over anyone that eats it. Now Mo teams with Nicole, the pretty creator of The Stuff’s advertising campaign (Andrea Marcovicci), and disgruntled snack food icon Chocolate Chip Charlie (Garrett Morris) to try and put a stop to this hostile takeover from within.

As written and directed by the legendary Larry Cohen (Q: The Winged Serpent and the It’s Alive movies), flick is a satirical mash-up of The Blob, Invasion of the Body Snatchers and Food of the Gods. It may have elements of many a sci-fi film, but it’s sights are clearly aimed at American consumerism. It’s mainly a critique of advertising, hype and the public buying frenzy that usually follows, when corporate America convinces us that we all have to have something. And it’s all wrapped in an amusing sci-fi/horror coating. It’s a low budget film with some very amusing practical SPFX ranging from some well rendered make-up prosthetics, as well as, some delightfully old fashioned model work to portray the carnage created when The Stuff finally comes out of human hiding and reveals itself. It’s a goofy movie and did not do very well when first released, but it has gained a following and received more appreciation, all these years later. It’s also bolstered by some nice 80s nostalgia and the humor and satire hits more than it misses.

The actors all get the material and walk a nice line between taking the script seriously, yet still having some fun with it. Moriarty plays his Mo as a very eccentric fellow. Don’t let his sarcasm and devil-may-care attitude fool you, he can be a hero when he needs to be. Andrea Marcovicci is pretty as Nicole and does get in on some of the action, so she isn’t just arm candy or a side kick. Comic legend Garrett Morris has a good time as dethroned chocolate chip king Charlie. He is part Famous Amos and part Dolemite. Paul Sorvino is also fun as a right-wing militia leader whom Mo turns to for help. Rounding out is Scott Bloom as a kid who discovers the truth about The Stuff and is now on the run from his own family. There are also some fun cameos, so keep your eyes peeled.

This isn’t a great flick, but it is clever and it’s satire well aimed and intended. It’s a fun movie and the cast has a good time, though without turning the material into an outright joke. The FX are charmingly old school by today’s standards and it’s messages about mass consumerism still apply.

MZNJ Personal Trivia: Saw this flick in a theater when it came out in 1985 and was disappointed, as the advertising had me expecting far more of a straight-up horror film. Watching it again with different expectations, I can now appreciate what Cohen was going for- MZNJ