MonsterZero NJ’s Saturday Night Double Feature is back! For years horror fans have discussed the similarities between the 1970 low budget flick, Equinox and Sam Raimi’s Evil Dead. Was this flick an inspiration for Raimi’s classic, or was it all a coincidence? We may never know exactly, but we can watch both films together and decide for ourselves…

Four college students (Edward Connell, Barbara Hewitt, Frank Bonner and Robin Christopher) venture into the woods to meet a professor (Fritz Leiber) who, unknown to them, has discovered an ancient book of evil. They find the cabin destroyed and once acquiring the book from a creepy old man (Irving L. Lichtenstein), find the devil himself is after them to get it back.

While this does sound like the plot of an Evil Dead film, it is actually the plot of the low budget horror, Equinox which was released in 1970. Over a decade before Raimi’s classic, the film does share a lot of plot elements, such as the students being possessed, here by the park ranger disguised Satan, and even the book itself is quite similar to Raimi’s Necronomicon. It’s never been stated that the film was an influence on Raimi’s flick, but Evil Dead effects artist Tom Sullivan admits seeing the film and it inspiring him to make movies. Draw you own conclusions.

Equinox is campy by today’s standards and is slow paced, unlike Raimi’s roller coaster ride, but there is some fun to be had and some nice SPFX for such a low budget flick. Equinox started out as a low budget short film, put together by three future FX legends, Dennis Muren, Jim Danforth and Dave Allen in 1967. It was made for about $6,500, from a story by Mark Thomas McGee and directed by Muren. So there is some great FX work for the time and budget, including some very cool stop-motion animated creatures, representing the Devil’s minions and Old Scratch himself in winged demon form. Producer Jack H. Harris saw their film and hired writer/director Jack Woods to film some new footage and expand the 70 minute short film into feature length and re-edit it. The film was finally released in 1970 as Equinox, shortened from the original title of Equinox…A Journey Into The Supernatural. I saw this as a kid and must admit it creeped me out back then. I watch it now and it’s more campy fun than scary, but it’s no denying that it is a valiant low budget effort, despite some very amateurish acting from the cast, including director Jack Woods, who also appears as The Devil in park ranger form.

This film, like Raimi’s, is now considered a classic. Whether it inspired Evil Dead or not, both films represent the achievement that future filmmakers can make on a micro-budget, if their hearts and talent are in the right place. Evil Dead fans should check it out for the interesting similarities, even if we may never know if Raimi indeed saw and was influenced by it, or if the familiar elements are just coincidence. It’s been released in a wonderful restored edition by the Criterion Collection, which includes the original short film and effects work that didn’t make the final cut. A campy, fun horror that gave the world, Dennis Muren, Jim Danforth and the late, great David Allen…and maybe…just maybe, Evil Dead. 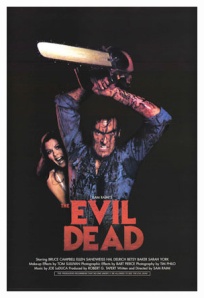 The original Evil Dead is one of my all time favorite horror movies, if not the all time favorite. I was fortunate enough to see it in a theater when it was released in 1981 and it changed how I looked at horror movies. This one was furiously paced, wildly inventive and delivered buckets of blood and gore, all on a shoestring budget. It launched writer/director Sam Raimi’s career and made a cult legend out of star Bruce Campbell.

The film opens as Ash (Bruce Campbell) and girlfriend, Linda (Betsy Baker) are traveling to vacation in a remote cabin with another couple, Scott (Hal Delrich) and Shelly (Sarah York), along with Ash’s sister, Cheryl (Ellen Sandweiss). When they get to the rundown cabin they find an old book and a tape recording, in the creepy cellar, that claims it is the book of the dead and wrapped in human flesh. Thinking it’s all a joke, they play the recording, which includes someone reading from the book and find out the hard way that it’s all too real, as they unleash horror beyond their imaginations. The quiet Cheryl is the first to be possessed, as she is attacked and literally raped by the trees during one of the film’s most talked about scenes, As the panicked bunch lock her in the cellar, it is only the beginning as they are soon possessed one by one by an ancient evil that can only be stopped by total bodily dismemberment. Let the fun begin!

The first Evil Dead did not have the heavy comic elements of it’s two sequels or recent series and what follows is a gore soaked roller coaster ride, when Ash finds himself the last man standing against his demon possessed friends. Raimi uses some fantastically inventive camera work and low budget gore effects to bring us Ash’s battle to survive against the people he once loved, in all it’s gory glory. The film is fast paced and once it starts, it never stops, as this classic turns the screws on it’s viewing audience with a barrage of scares, jolts and suspense, all bathed in buckets of blood. This was the first of it’s kind to use such a relentless and merciless attack on it’s viewers where most films at the time, like John Carpenter’s Halloween, or the original Friday The 13th, used a bit of a slower burn and more of a methodical pace to present it’s suspense and scares. Raimi paces this like an action flick. Carpenter did crank things up in the last act of The Fog, a year earlier, but it was still nothing like Raimi’s final act, as the outnumbered Ash refuses to “join us”, as his demonic assailants constantly taunt.

Evil Dead revolutionized horror to a degree and inspired some of today’s best young horror directors. Without it, we may not have a Blair Witch, Dead Alive or Martyrs. While we still get the occasional slow burn horror like Paranormal Activity and the films of Ti West and Stevan Mena, which is just fine, Raimi opened the door for horror filmmakers to take a far more aggressive approach and showed us horror can be deliriously scary, delightfully gory and just plain fun. A true classic that placed Raimi amongst the likes of George Romero and John Carpenter!

Check out our review of the remake!

If you’ve got time, add Evil Dead II as a third feature, which also shares some amusing similarities with Dennis Muren and Jack Woods’ 1970 cult classic!