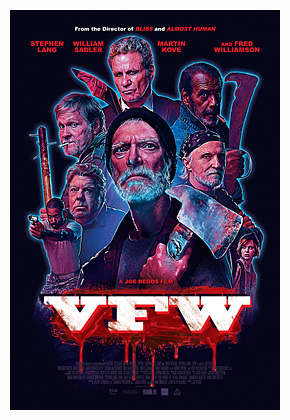 Bliss director Joe Begos’ latest flick takes place in a very near future where a highly addictive drug called “hype” has turned it’s users into violent addicts and city streets into war zones. Inside one of those war zones lives Viet Nam war veteran Fred (Stephen Lang) who runs a VFW hall where his friends and fellow soldiers Walter (William Sadler), Abe (Fred Williamson), Thomas (George Wendt), Lou (Martin Kove) and Doug (David Patrick Kelly) hang out. One night a young woman called Lizard (Sierra McCormick) steals some hype from drug dealer Boz (Travis Hammer), to get revenge on Boz for killing her sister (Linnea Wilson). On the run from Boz and his gang, Lizard runs into the VFW hall for cover. Still men of honor, Fred and the other veterans vow to protect Lizard as Boz, his thugs and an army of frantic hype addicts lay siege to the VFW hall.

Flick is basically John Carpenter’s Assault on Precinct 13 on crack as directed by Begos from a script by Matthew McArdle and Max Brallier. That is in no way a bad thing, as this is a bloody blast of an action flick as the war veterans take on an army of zoned-out drug addicts and a psychotic gang of thugs. We are treated to spurting blood, flying limbs and exploding heads, as the war vets use guns, axes and a host of homemade booby traps and weapons to keep the vicious gang at bay. It’s fast paced, though not enough that we don’t get to know this endearing bunch of men, who never stopped being soldiers at heart. That is what makes this click all the better, is that despite all the fast and furious action, Begos lets the script’s messages about respecting and honoring those who have served, shine through. One of the very few issues with the flick is that the army of crazed drug addicts seems to come and go at the needs of the script, instead of consistently laying siege to the VFW hall. They disappear conveniently when the film needs a quiet moment for our characters to regroup. Other than that, Begos accomplishes a lot on a small budget, delivers the blood and action and has assembled a great cast of veteran actors to play his aged warriors…

…and how can you not like this cast!…Stephan Lang makes his Fred a world weary yet still honorable and strong man, one who still has nobility and honor. Sadler makes for a very likable Walter, a good-natured man who remembers the days of war as a time of loyalty and friends made. Williamson still kicks ass as the tough yet somewhat mellowing Abe and Martin Kove is solid as the business man of the group, car salesman Lou. Lou is the only one wanting to “deal” with Boz and his gang to save his own skin. Wendt and Kelly are also likable as grizzled vets Thomas and Doug, who still have their senses of humor about them. As our bad guys, Travis Hammer is a bit weak as Boz. He’s more sleazy than scary or intimidating, but he isn’t a hinderance to the blood soaked fun. Making up for it is Bliss’ Dora Madison as gang member Gutter. She’s ruthless, vicious and deadly and probably should have been the main villain…just sayin’. Any girl that takes on Fred “The Hammer” Williamson is not to be taken lightly. Rounding out is Tom Williamson (All Cheerleaders Die ) as a young vet named Shawn who wanders into the hall just home from the Middle East, Sierra McCormick (Some Kind of Hate), who is solid as the tough Lizard and Begos regular Graham Skipper as Boz’s brother, Roadie. A good cast.

Overall, this was a blood-soaked blast of a good time that manages to not only be bloody entertaining, but heartfelt about how we should view our war veterans. It’s got a lot of bloody action, but doesn’t move too fast that we don’t endear to these grizzled vets. It has some well rendered and plentiful gore, a great John Carpenter-esque score by Steve Moore and some effective cinematography by Mike Testin. All in all, it might be the most fun you’ll have at a bloodbath in quite some time. Flick is available on Amazon Prime and definitely worth the rental!