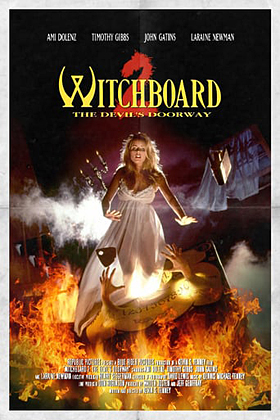 Flick is Kevin S. Tenney’s sequel to his own 1986 Witchboard, but aside from a ouija board being key to the plot, it is a sequel in name only. Pretty young Paige (Ami Dolenz) has moved into a new apartment only to find a ouija board left behind by the previous owner. Of course she begins to use it and is contacted by the former tenant, a woman named Susan Sidney (Julie Michaels). At first the spirit seems to want help from Paige in solving her murder, but there may be a deeper and far more sinister reason for the spirit’s presence.

Film is written and directed by Tenney, much like the first movie and like that flick is far more fun than scary. It follows the first film’s formula of a woman being contacted by a spirit via a ouija board and the ghost, at first, appearing benign and in need of help. Like the 1986 movie, Paige also has a jerk of a boyfriend (Timothy Gibbs) who we have a hard time liking and our heroine begins to show signs of progressive entrapment, as the sprit slowly takes control. Aside from the basic story elements, though, there seems to be no connection between Paige and Witchboard‘s Linda, nor any shared characters or referenced events. There is little or no suspense or scares, but it is entertaining and there are a few bloody deaths, though no explicit gore or nudity. Paige is a cute and likable heroine, even if her outfit of daisy dukes and cowboy boots doesn’t quite click as an outfit one would dig up a body in the middle of the night in. It does play much like an 80s horror, despite being made in 1993 and that helps with an amusing nostalgia factor. Tenney’s films aren’t known for mustering much intensity, but this flick has a few moments, though a few border on the silly, too, like a scene with a circular saw blade chasing it’s prey.

The cast is small but solid for this type of movie. Fan favorite Ami Dolenz is a good choice for Paige. She cute, sexy and makes an engaging heroine. She’s very likable and gives off a good Nancy Drew vibe as she investigates Susan’s alleged murder. Timothy Gibbs is fine as Paige’s cop ex-boyfriend Mitch, who remains an unlikable jerk till the last act, which makes it hard to root for him when he starts to behave more like a hero. John Gatins is far more likable as the landlords’ photographer son Russel, who takes an interest in Paige and thus her paranormal investigation. Russel’s parents, hippie landlady Elaine and her handyman husband, Jonas are played by SNL legend Laraine Newman and TV actor Christopher Michael Moore, respectively. Actress and stunt woman Julie Michaels (the hottie from the opening scene of Jason Goes to Hell: The Final Friday) plays the late Susan Sidney in flashback and possession sequences and is effective in the part. Both Dolenz and Newman would work for Tenney again in his Die Hard with college coeds, Demolition University.

This flick doesn’t seem to have garnered the cult classic reputation that the original Witchboard has, though it’s just as amusing and Dolenz makes for a bit more animated a heroine than the slightly wooden Tawny Kitaen. It’s got an 80s vibe, despite it now being 1993, as it would be three more years before Scream would make horror flicks become more self aware and filled with pop culture referencing. It has a few spooky moments, some bloody demises and enough nostalgia to make an entertaining watch.