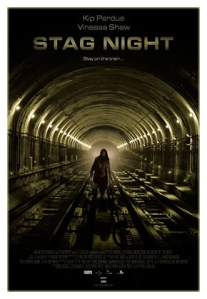 Stag Night finds a group of bachelor partiers and a couple of strippers in NYC running afoul of a tribe of vicious, cannibalistic homeless people in the subways after hours. Flick is written and directed by Peter A. Dowling and has a group of young antagonists who aren’t particularly likable and therefor we really don’t care what happens to them. Their pursuers are generic snarling savages and don’t have enough of a persona to really generate fear or dread. So, we have a basic by-the-numbers gory horror that fails to generate any thrills, because there is nothing given us to get thrilled about. Many of today’s filmmakers miss the point, horror needs to evoke emotions in it’s audience, just as much as any other type of film. Fear is an emotion and if we care about characters, we are afraid when they are. Flicks like this also need a strong villain to evoke that fear. Gore and mood lighting do not a horror film make. Production value is decent and the locations and gore FX are effective, but that’s about it. Very routine despite an amusing premise. Stars Kip Pardue, Vinessa Shaw, Sarah Barrand, Breckin Meyer, Karl Geary and martial artist/actor Scott Adkins.