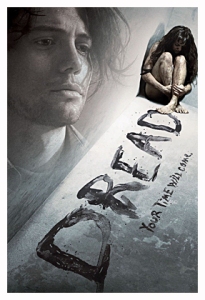 Dread is a dark film that surprises by having deeper things going on than the deceiving coming attractions would have us believe. It’s a simple but gruesome tale, of college students doing a study on fear…and what could possibly go wrong with that?

The film, written and directed by Anthony DiBlasi (Extremity, Last Shift), from a story by Clive Barker, is actually well made and tries to accomplish something beyond just portraying unpleasantness and pain. DiBlasi gives his sometimes cruel and brutal film, some depth and emotional resonance. That’s the difference between this and the recent trend of torture horror. The violence in the last act is part of the downward spiral the story slowly makes and is not done for it’s own sake, or to outdo the last torture themed flick. It’s not the subject of the film, but an unfortunate result of a character’s unraveling. There are cruel moments, but they are brief and have impact. We feel horrified for the victims, not numbed, as they are people and not just subjects for some SPFX team’s expertise. Not an enjoyable film, on an entertainment level, but an interesting one that was released as part of the After Dark Horrorfest and produced by Barker himself. Stars Jackson Rathbone, Shaun Evans and Hanne Steen, who all perform the material well.