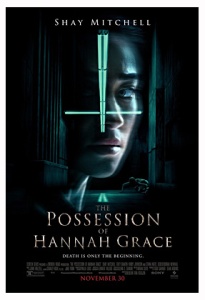 THE POSSESSION OF HANNAH GRACE (2018)

Megan Reed (Shay Mitchell) is an ex-cop still traumatized over freezing up and allowing a perpetrator to kill her partner. It’s turned her into a recovering addict who gets a graveyard shift job at the morgue. Makes sense! Along comes the body of Hannah Grace (Kirby Johnson), a young girl killed during a botched exorcism. The demonic entity that inhabits Hannah’s body hasn’t left yet and supernatural hi-jinx ensue.

Film is directed by someone named Diederik Van Rooijen from an uninspired script from Brian Sieve. It offers almost nothing new to the possession sub-genre and pulls out every lame cliché demonic themed flicks have to offer. Any new wrinkles are few, far between and silly…like Hannah’s demon infested corpse being able to regenerate itself with each person it kills. What? It’s also hard to believe a former cop who is suffering from depression over the death of her partner would choose a morgue as a new place of work. Mitchell makes a solid enough heroine, but is let down by the movie surrounding her. Hannah Grace made almost four times it’s budget back at the box office, so someone thought this drivel was cool.