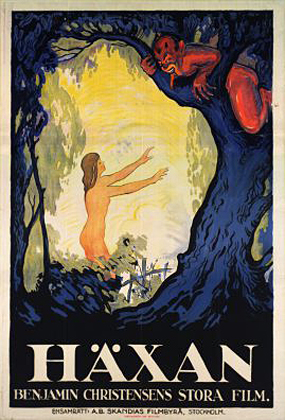 Häxan is a 1922 Swiss silent film whose title means “Witch”. It’s part documentary and part dramatic recreation of tales of witchcraft, the demonic and the inquisition that arose from the fear of such, around the Middle Ages. Told in seven segments, it starts out with some facts about early claims of witches, devils and demons and then delves into recreations of some tales of witchcraft and Satanism and then the fear-filled and cruel reaction from the clergy of the time. The documentary then tries, in it’s last part, to give modern…modern at the time, as this film is now almost 100 years old…explanations for what is perceived as the signs of witchcraft, such as psychological and physical ailments.

The film is directed by Benjamin Christensen from his own script. Häxan covers a lot of folklore tales about witches cavorting with The Devil and his minions, demonic seduction and corruption and in doing so, provides some very startling and spooky imagery. The representations of witches flying through the air on brooms, being seduced by demons and even giving birth to monsters, is quite bold for a film of this era and quite well rendered for a film almost a century old. Some of what we see is quite brazen, such as demons frantically churning butter while watching the sexual acts between witch and devil. Their swift up and down arm movements obviously simulating…well, you get the idea. The scenes of torture and interrogation are quite effective, as well and one feels sorry for those under the clergy’s scrutiny or accused of evil acts. The film is loaded with atmosphere and some extremely Gothic imagery, one of the first films of it’s kind to represent such subject matter so graphically. Christensen’s visual eye is quite stunning and filled with Halloween-esque images, especially when portraying the scenes of the witches partying with the demonic in the woods. There are a variety of demonic creatures, uniquely designed and rendered and involved in acts that must have been considered quite daring for the early 1920s…and it was daring as the film was banned here in the United States at the time.

This is a pioneer horror film that was one of the first to portray witchcraft and satanic activity in such detail. Benjamin Christensen gives a history of suspected witchcraft and then treats us to some wildly vivid representation of the tales and folklore that terrified the middle ages. We get stunning visuals of nude maidens sleepwalking into the arms of their demonic seducers, witches flying on their trademarked brooms and even a tongue flickering Satan himself (Christensen) corrupting nuns in their own convent. It’s a stunning achievement and at almost a century old, a work that hasn’t lost any of it’s potency and a film every true horror fan should see.