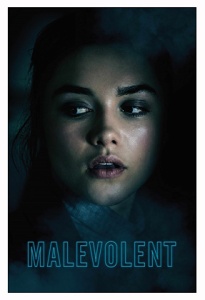 Netflix original takes place in 1986 Scotland where American siblings Angela (Florence Pugh) and Jackson (Ben Lloyd-Hughes) are running a paranormal investigation scam to earn money. They are called to investigate a former foster home where some of the girls were murdered and the owner Mrs. Green (Celia Imrie) believes they now haunt the house. What starts out as another con becomes far too real for the phony investigators and their very lives may now be in danger as there is something malevolent in that house.

Despite there being a lot of familiar elements here, the film is well directed by Olaf De Fleur from a script by Ben Ketai (The Forest) and Eva Konstantopoulos. It’s atmospheric and has a Gothic visual style. De Fleur uses it’s spooky location well and there is some effectively bloody violence in the last act. Florence Pugh is very good as Angela, a young woman whose mother was thought insane, but apparently had legitimate psychic abilities that her daughter may now share. Ben Lloyd-Hughes is also a perfect douche as her con artist brother, who has no problem bilking grieving innocents out of their cash and doesn’t realize his sister may be the real thing. The rest of the cast are effective as well, even if we see certain character revelations coming. Nothing new, but effective enough to entertain and Pugh is an actress worth keeping an eye on as she gives Angela some integrity and depth.