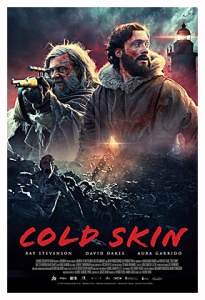 Period piece is set in 1914 with a young man named Friend (David Oakes) traveling to a secluded island as a Weather Official. There he finds the man he’s replacing is missing and cantankerous lighthouse keeper Gruner (Ray Stevenson) has fortified the lighthouse against something he won’t speak of. Soon Friend finds out that he and Gruner are not alone, as the surrounding waters are home to a society of aquatic humanoids that aren’t happy about the island’s human occupants.

Flick is atmospherically directed by Xavier Gens (Frontier(s),The Divide) and is a Lovecraftian tale of man against monster…or so we first believe. The script by Jesús Olmo and Eron Sheean hints that these creatures are quite intelligent, though and may simply be acting in self defense, as Gruner hasn’t been exactly treating them nicely. There is a lot of action, fierce battles and plenty of bloodshed as Gruner and Friend fend off their attackers. As with many flicks of this type, we soon begin to question just who are the bad guys and who are the victims. Gens proves again he has a solid visual style and delivers an old fashioned and entertaining tale of man discovering things yet undreamt of. Also stars Aura Garrido as a female creature that Gruner has captured and been mistreating in some questionable ways.