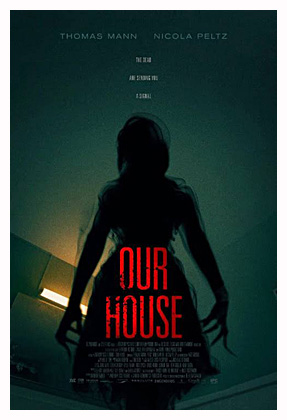 Brilliant college student Ethan (Thomas Mann) is forced to drop out of school to care for his younger brother Matt (Percy Hynes-White) and his little sister Becca (Kate Moyer) when his parents are killed in a car accident. He keeps working on his experiment, though, a device to create wireless energy. While the device has yet to accomplish it’s purpose, unknown to Ethan, it is opening a doorway to the afterlife. At first Matt and Becca think they are being visited by their parents, but soon it is apparent someone else has crossed over, someone malevolent and with bad intentions.

Film is well directed by Anthony Scott Burns (the Father’s Day segment from Holidays) from a screenplay by Nathan Parker, which is based on Matt Osterman’s indie film Ghost From The Machine. Our House starts out with an interesting way of getting the supernatural ball rolling by having Ethan’s machine accidentally opening a door to the spirit world and letting something into the house. Eventually, though, it does settle into becoming a more routine haunting flick with both a benign and a more malevolent spirit focusing attention on little Becca. It also follows the traditional formula with a skeptical adult…here, Ethan…thinking Becca and Matt are just working through their grief. What elevates the film from the routine, is that at it’s center it is a very poignant story of children of various ages dealing with the sudden death of their parents. Anthony Scott Burns does use the familiar haunting tropes and very well, but it is his portrayal of a family in mourning and how each member deals with it, that makes the movie a supernatural horror with a heart and soul. These kids are on their own and Ethan is trying to raise them and it gives us a strong emotional investment in the young family. Even if we’ve seen the supernatural elements before, they are all the more effective because we care about the characters. Nathan Parker’s screenplay also includes a neighbor, Tom (Robert B. Kennedy) who is suffering from the loss of his wife and whose house is also falling under the machine’s influence. It creates a wild card character whose emotional instability adds some uncertainty, because we know he’ll enter the mix at the worse possible time. It adds to the supernatural elements which are already atmospheric and spooky, despite the familiarity. It was also refreshing that Anthony Scott Burns keeps things subtle, until the very end and even then avoids going over the top, keeping the story grounded. Only a brief scene with a floating doll came across as a bit silly and the rest of the flick is more accessible as it avoids getting too theatrical for it’s own good.

There is a very effective cast here. Lead Thomas Mann is very good as Ethan. He gives us a brilliant student who is a bit self-absorbed concerning his project and his attention is torn away and back to his family as he must now be guardian and provider for Matt and Becca. The actor portrays well both the frustration and the sacrifice as Ethan must put aside his life and be a dad to his siblings. He tries to find time for them and follow his dream and Mann essays the awkward juggling of responsibilities well. Percy Hynes-White is solid as Matt. He’s in high school and his way of handling things is to withdraw, until he thinks there is a chance his parents have returned to the house. He also blames Ethan for their deaths and that adds tension and conflict to an already tense situation. Kate Moyer was really good as little Becca. The young actress portrays a little girl who has her parents ripped away and now seeks solace from what family she has left. When she thinks her parents have returned, she embraces the spirits without realizing they may not be who they seem. She also finds a friend in the spirit of a little girl, Alice who is followed by a far more malevolent entity. In support is Robert B. Kennedy as the emotionally troubled Tom, who has lost his wife and Nicola Peltz as Ethan’s concerned girlfriend Hannah. Sadly Hannah is left on the sidelines for a lot of the movie, until resurfacing at the end. She was a sweet and caring character and her presence is missed when Ethan is sorting out his life.

Overall, this was an effective and enjoyable supernatural thriller. The basic story may have been routine, but the director and script start things off in an intriguing way and keep us interested with a very strong emotional center. The familiar supernatural elements are used well and are more effective as we care about the characters. Anthony Scott Burns keeps things from getting too theatrical which serves the overall story. It’s a refreshingly subtle spook fest with a good cast and a very likable bunch of characters to fear for. As he also had the best segment in Holidays, Burns proves to be a filmmaker to keep an eye on. Another solid release from the folks at IFC Midnight.