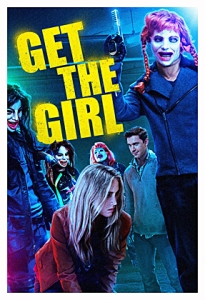 Dumb and dull flick has love-struck Clarence (Justin Dobies) falling in love with sexy bartender Alex (Elizabeth Whitson) and hiring lowlife Patrick (Noah Segan) to kidnap her, so he can rescue her and become her hero to win her heart. Things go awry and soon blood and bullets are flying instead of cupid’s arrows.

Writer director Eric England has shown some potential with his horror flicks like Contracted and Madison County, but fails as a Tarantino wannabe. It’s a silly movie with a story that gets dumber and dumber as it goes along, even though it’s trying to be clever. It also tries way too hard to be hip and the characters are annoying and the attempts at slick humor fall flat. England has proven he can make a good movie, especially in the horror genre and it’s hard to give a filmmaker a hard time for trying something different, but maybe the hip, ultra-violent comedy thing is not for him. Also stars Scout Taylor-Compton as Patrick’s dim-witted girlfriend.