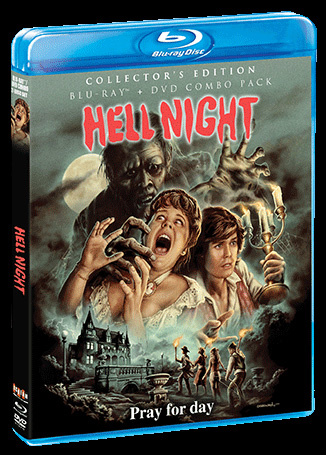 Hell Night is a fun 1981 slasher that finds a group of college pledges spending the night in a haunted house as part of their initiation (Full Review HERE). It’s a good representation of the type of horror movie made back during that era and now with the added nostalgia, it’s aged very well. Scream Factory has resurrected this long sought after and unavailable flick and given it their star treatment. It comes in a Blu-Ray/DVD combo pack and with a host of extras

As for the feature…

The picture is a 4K remaster from a 35mm print and is presented in the original 1.85:1 widescreen aspect ratio, preserving the film’s theatrical dimensions. There is some grain in the picture and a few lines here and there, but for a low budget film over 35 years-old, this is a great looking disc. The colors are vibrant and the picture has some nice contrast, especially in the shadow filled night scenes. The sound is in DTS-HD mono and it sounds just fine. Again, this low budget flick is from 1981, so don’t expect 7.1 surround sound. The menus are simple, fun and easy to navigate, which is the usual for Scream Factory’s releases. Overall a nice restoration of a cult classic and it brought memories back, having seen it during it’s theatrical run in a theater.

Now on to the extras…

The extras consist of some wonderful new interviews with cast and crew, who are all too happy to talk about this sometimes overlooked movie. We have interviews with star Linda Blair, leading man Peter Barton, producer Bruce Cohn Curtis and writer Randy Feldman. We then get some fun one on one conversations between actors Vince Van Patten and Suki Goodwin and then Kevin Brophy and Jenny Neumann. We also get a look at the design of the film and an examination of the death scenes with various crew members and a return to the original location. Follow that up with the usual trailers, TV spots, radio spots and photo gallery and you have a really fun and informative disc giving a low budget cult classic the respect it deserves!

As a film that has nostalgic resonance with me, I can’t express how great it is to see this little flick get such royal treatment! The disc arrives from Scream Factory on 1/2/18!