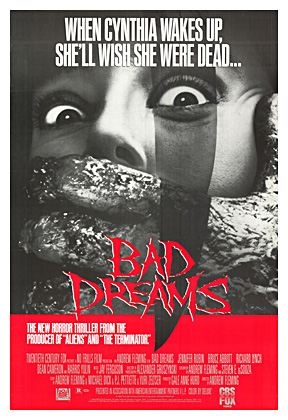 1988 horror tells the story of Cynthia (Jennifer Rubin), who has been in a coma for 13 years after being the sole survivor of a mass suicde at the Unity Fields cult compound. She suddenly awakens and immediately begins treatment by her psychiatrist, Dr. Alex Karmen (Bruce Abbott). As her memories slowly return, she finds herself haunted by cult leader Franklin Harris (Richard Lynch) who appears to her in her dreams. As the dreams persist, Cynthia’s fellow patients start dying in horrible ways and Cynthia believes Harris is somehow killing those around her from beyond the grave.

Dull Elm Street retread is directed by The Craft’s Andrew Fleming from a script by he and Steven de Souza. It replaces dream demon Freddy Krueger with cult leader Harris, and is a lot less inventive with it’s dream sequences. The film is neither scary nor suspenseful, though, at least there is some well orchestrated and plentiful gore to amuse us. The pacing is very slow and feels longer than it’s 84 minute running time and we question why patients with emotional problems have such easy access to things such as knives and poison. There is a big reveal in the last act, too, that fizzles, as it is even sillier than a phantom cult leader killing from the great beyond.

The cast is a mixed bag. Jennifer Rubin makes a good heroine and performs some silly scenes very straight, which helps. Lynch is an almost legendary movie bad guy and he gets the most out of the thinly written material, making Harris a creepy specter. Abbott is a dull hero and would have been better served as a second banana like he was in Re-Animator. Dean Cameron is completely annoying as patient, Ralph, though veteran Harris Yulin is fairly solid as a stereotypical doctor with a secret agenda. 80s icon E.G. Daily also appears, with a small role as the first victim of Harris’ supernatural hi-jinx.

This film has a following and thus it’s fans. I am not one of them. I didn’t think much of it when I first watched it on VHS back in the day and the revisit didn’t change things, even with some added 80s nostalgia. It’s dull, slow paced and despite some good gore, is devoid of any thrills, chills or inventiveness. A unsuccessful attempt to clone the success of Nightmare on Elm Street 3: Dream Warriors including stealing actress Rubin.

2 scalpels because it takes place in a hospital and that’s all I could think of.