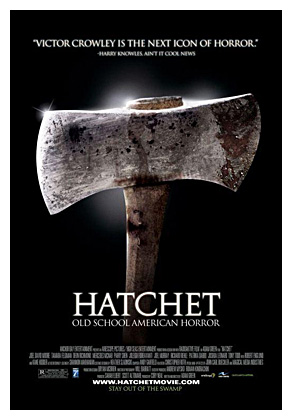 Hatchet is both a homage and a spoof of the slasher films of the 80s and it’s obvious director Adam Green has a love for the films he playfully has fun with. Hatchet is a gory but silly story of Victor Crowley, a deformed boogie man legend claims stalks the New Orleans bayou. When a group of tourists on a haunted swamp tour become shipwrecked in Crowley’s backyard, they soon learn this is one urban legend with a lot of truth to it.
While Green does a good job recreating one of those 80s slasher flicks, he’s not as totally successful at juggling the gory horror with the comedy elements. Green is not subtle here and the film jarringly changes tone between scenes where one minute it’s being a comedy, and the next it’s trying to be seriously spooky. It’s this back and forth that keeps one from completely settling into his tribute to all things Jason. Green is also hindered here from his inner film geek seeing his vision not as a story, but as a movie. This gives Hatchet a staged look, it looks like a movie filmed on sets whether it was or wasn’t. This robs us of the illusion of watching his story unfold and instead constantly reminds us that this is only a movie and these are not characters but actors. Even in a playful homage like this, we still need that illusion.
But, there is still fun to be had as Adam Green does both skewer and stroke the slasher genre. The gore is over the top and top notch and he points out with a wink the absurdities of some of the films it references…Crowley finding a hand sander in the middle of a swamp, rain at a most crucial and inappropriate time…and the film geek in us knows exactly where he’s coming from. Despite the flaws in his method we still get his madness. Stars horror legends Tony Todd, Robert Englund and Kane Hodder as Crowley.

One thought on “HORROR YOU MIGHT HAVE MISSED: HATCHET (2006)”