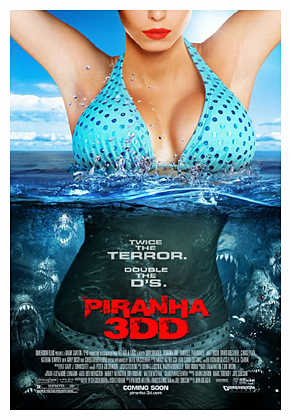 Sequel to Alexandre Aja’s Piranha 3D (which is in itself a remake) is not as fun as it’s predecessor, nor is it quite as bad as it’s made out to be. The story, this time, has the prehistoric piranha traveling from the decimated Lake Victoria through an underground river to a sleazy water theme park to continue their feeding.

The problem with this sequel is, director John Gulager seems to take the material a little too seriously despite a script that replaces Piranha 3D‘s wit for blatantly stupid. And stupid would be fine if director Gulager took the ball and ran with it like Alexandre Aja did. The budget for this installment is smaller and thus the film’s scale and carnage lesser, but still, look how fun the low budget 1978 original was without the budget and bloodshed of the 2010 remake. Joe Dante knew to play it serious to a point, but all the while letting the cast and audience in on the fun. When you open a film with Gary Busey and a dead cow that farts piranha eggs, there’s no point in pretending you’re directing Jaws. The gore effects are fine although the CGI is even weaker than it’s predecessor, but despite it’s faults, there is still some entertainment to be had, such as MZNJ Halloween Hottie Katrina Bowden, reciting one of the best lines in the film involving a baby piranha and a certain part of her anatomy.

Gulager’s cast is fine, though only David Hasselhoff seems to really be in on the joke. The rest of the cast, including pretty lead Danielle Panabaker, try really hard to give they proceedings some weight, but probably should have just embraced the goofy material and had a good time. The cameos from some of the survivors from the last entry are fun and there are some funny bits, most involving The Hoff.

It could have been a lot better, but Piranha 3DD did pass the time and I actually feel that with a better script that was more clever than crude, John Gulager might actually have delivered a decent B-movie. An OK time waster when watched in the right frame of mind, but far short of the deliriously fun remake that precedes it.