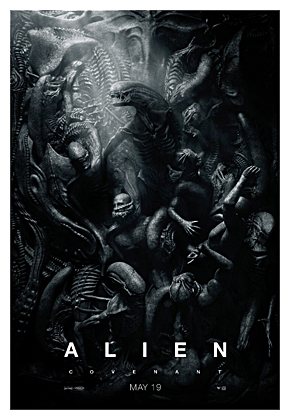 WARNING: There might be some details here that could be considered as spoilers to those who want to go in knowing as little as possible. Some plot elements had to be divulged somewhat in order to give an accurate opinion. -MZNJ

Prometheus was a pretentious mess that tried to expand on the Alien franchise by delving into our creation and thus that of the Xenomorphs. It didn’t make good on it’s initial ideas and had a crew of supposed genius scientists doing incredibly stupid things. Ridley Scott tries to repair a bit of the damage with Alien: Covenant, which brings us closer to the world he introduced us to in 1979. The flick takes place ten years later with the spaceship Covenant heading to populate a new world with a small crew and over two thousand colonists in hyper-sleep. A massive neutrino burst blasts the ship causing damage and forcing the ship synthetic, Walter (Michael Fassbender) to awaken the crew. While engaging in repairs, they receive a signal from what appears to be a human source on a nearby planet. Upon investigation, the crew finds out not only the fate of Elizabeth Shaw (Noomi Repace) and the synthetic David (also Michael Fassbender), but discover an awaiting nightmare that they may not escape from.

New chapter in the Alien saga is definitely better than Prometheus, but that’s not saying much, nor is it by the amount needed to restore complete faith in this prequel series. This one is written by John Logan and Dante Harper, from a story by Jack Paglen and Michael Green and the first hour is actually quite dull till we reach the unknown planet and find the synthetic human David living in what appears to once have been a city of otherworldly beings. There the film picks up a bit as it takes on a sort of Frankenstein twist as David has been quite busy playing God on his new world. It then takes till the last act where we start to get some of the action we came for and some familiar faces make their appearance…and that’s also the other problem. At this point the Xenomorph’s are far too familiar to be really frightening and it is the messianic David that really chills one as there are definitely a few screws loose in his reattached, megalomaniacal head. In these scenes the film livens up and delivers some chills as our unsuspecting, stranded crew have no idea what little ole David has been doing to relieve the boredom…but they’re going to find out. There is some surprisingly abundant gore and the film is sumptuous looking, as are all of Scott’s films, but it all comes to a terribly predictable end that we can all see coming almost an hour away. There are a few scenes along the way with some impact…alien interrupted shower sex anyone?…but otherwise it’s the same ole, same ole right up to how the remaining crew decide to deal with the critter…really, after almost 40 years you’re still sticking with that???

The cast are good, though the characters here are very thinly written and it’s hard to connect on an emotional level with anybody but the chill-inducing David. Katherine Waterston is our heroine Daniels Branson and while she is fine in the last act when she goes all Ripley, she really doesn’t make much of an impact until then. One wonders where all the piss and vinegar comes from as she is played very low-key up till that point. Comic actor Danny McBride stands out a bit as pilot Tennessee. McBride is very restrained here and plays the role very seriously…as the film is basically humorless, anyway. He makes a solid hero even if, like Waterston, he doesn’t get to cowboy-up till the last act. Really standing out doing exceptional work is Michael Fassbender as both David and Walter. As Covenant synthetic Walter we get the boyish innocence and Spock-like logic we expect from these android characters. It is when he gets to chew the scenery as the messiah/Dr. Frankenstein mash-up that is David, he really chills with his performance and out-does the creepy critters in the goosebumps department. His relationship with the newer model Walter is quite interesting as he tries to convince the synthetic to see things his way. The scenes revealing what David has been up to the last ten years are among the best in the movie. Once we go back to the alien loose on the ship format, it gets very ‘been there, done that’. As for the rest of the cast that populate this prequel sequel, they are basically two dimensional alien fodder and we never really care about them or remember their names for that matter.

In conclusion, yes it was better than it’s predecessor, but not by much and it takes over an hour to really get going. The characters are bland, the aliens at this point are too familiar to be truly frightening and their antics are getting stale. What makes this movie worth watching is Michael Fassbender’s truly chilling portrayal of David and the messianic Dr. Frankenstein he’s become. His relationship with the xenomorph’s is a highlight, though it does unintentionally clue us in as to how this is all going to end…and it ends exactly how you think it’s going to. Not the pretentious mess that was Prometheus, but still a long way from the original classic or James Cameron’s awesome sequel.

Be Warned: this is the Red Band trailer…