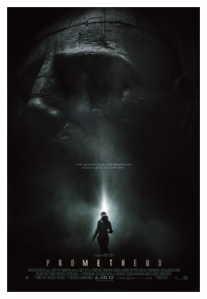 Prometheus is not only Ridley Scott’s long awaited return to sci-fi, but also to the same universe that his breakout classic Alien took place in. Prometheus is a prequel of sorts detailing events that may have set the story of Alien in motion and created it’s iconic creatures. So why at the climax are we so unsatisfied by what we just saw? As with all Scott’s films, Prometheus is a gorgeously designed and filmed movie, but despite the interesting set-up about the possible origins of man and the existence of other superior beings, the visuals are just an empty candy coating as the film goes nowhere with these ideas. We get a story about Dr. Elizabeth Shaw (Noomi Repace) who discovers numerous occurrences of a hieroglyphic throughout various earth times and cultures which she interprets as an invitation from an extraterrestrial race. Enter the Weyland Corporation (The villainous “Company” from the Alien films) who fund an expedition, but apparently with their own agenda. And the good ship Prometheus is off to investigate with it’s cliché corporate villain captain (Charlize Theron, who really doesn’t do much but be a company bitch) and the usual suspicious android, David (Michael Fassbender, who has the best role).

…And herein lies the problem. We start out expecting to find something fascinating, but Damon Lindelof and Jon Spaihts’ script gives us a cliche’ story of extraterrestrials whose intentions aren’t as noble as first believed and slimy corporate villains who want to use what they find for there own nefarious purposes. Sorry, been there, done that. Seen it all before. The beings’ true purpose in their genetic tampering is never revealed, nor does it make sense to leave evidence of their existence on earth when they are ultimately up to no good. Prometheus leaves the most interesting questions unanswered and instead moves the plot along by having characters do the stupidest things…seriously, genius scientists taking their helmets off in an alien environment without any clue that there might be an undetected threat?…Are you kidding me? I’ll admit there are a few tense scenes, although the film is rather laid back pace wise, and could have used a lot more suspense and energy if it wasn’t going to get overly interesting with it’s story. And most aggravating of all, is that the film is open-ended. It doesn’t even give us a satisfying conclusion. It leaves the most important questions unanswered and implies we have to wait for yet another film to find out how this story ends and how it links to the beginning of Alien, which it eventually will.
A major disappointment from Ridley Scott and company.