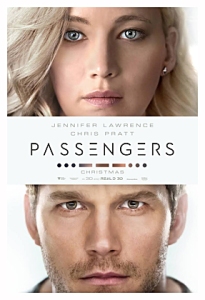 Painfully generic Sci-fi/romance has the starship Avalon making a 100+ year journey to a new home world with it’s crew and passengers in hyper sleep for the trip. The ship sustains some damage during a trip through an asteroid field…guess, there is no safety contingency for that…and one of the results is the early awakening of engineer Jim Preston (Chris Pratt) about 90 years too early, with no way (conveniently for the story) of getting back to hibernation…I guess no safety contingency for that either. After a year of loneliness, Jim reviews the ship’s passenger logs…a bit creepy…and finds and falls for pretty Aurora Lane and decides to awaken her, too…even creepier. Faster than you can say The Love Boat, the two fall head over heels, till the damage to the ship becomes critical and now they are the only hope of saving the lives of everyone sleeping on board…and did I mention that Jim is conveniently an engineer?

As directed by Morten Tyldum from Jon Saithts’ hopelessly cliché script, this is a dull and predictable flick despite Lawrence and Pratt having some real chemistry. Everything happens for convenience, whether to help or hinder our couple, like Lawrence Fishburn’s Captain waking up just long enough to point our couple in the right direction before leaving the scenario, or just the right miscommunication at the wrong time allowing Aurora to find out her awakening wasn’t an accident. And that is another mistake, having Jim cruelly and selfishly awakening Aurora to suffer his own fate, just for company, is something we can never forgive the character for, even if Aurora does…and it’s no surprise in this dreck that she unrealistically will. The FX are top notch and the cast give it their all, but a weak script and by-the-numbers direction sink the Avalon far quicker than any asteroids. Would love to see Lawrence and Pratt in a far better flick; they were good together.