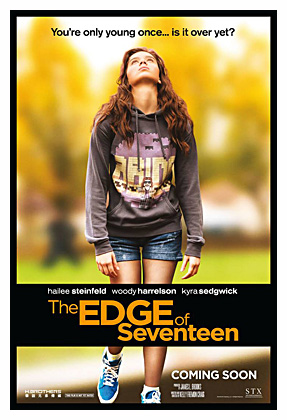 Nadine Franklin (Hailee Steinfeld) has always walked to the beat of her own drum…and it hasn’t made life any easier when it comes to school and making friends. Her dad was one of the only people she felt understood her and he passed away four years earlier. She is jealous over her super popular older brother, Darian (Blake Jenner), especially when her one and only friend, Krista (Haley Lu Richardson) starts dating him. Feeling betrayed, Nadine sets out to find her place in the world with a little help from her cynical teacher, Mr. Bruner (Woody Harrelson) and Erwin, a nerdy classmate (Hayden Szeto) who might be what she’s been looking for all along, but is too absorbed in her own drama to notice.

Written and directed by Kelly Fremon Craig, this is a poignant, feisty and sometimes very funny coming of age story with a firecracker performance from it’s leading lady. One of the things that makes this comedy/drama so enjoyable is that Craig uses the familiar tropes that we expect from these movies, yet keeps them fresh, so they don’t quite come across as the well-worn clichés they are. Her script paints a portrait of a spirited and slightly eccentric young girl who is just trying to find her place. She doesn’t quite feel comfortable with most of her peers and is sort of left to wander once she feels she’s lost her best and only friend. Nadine embarks on a funny and heartfelt journey of discovery both in herself and in those around her. Sometimes what you are looking for is right in front of you and Nadine needs to find that out for herself. There are some very funny scenes and some well written and sometimes cleverly raunchy dialogue, especially for Steinfeld’s Nadine. If the film, stumbles a little it is that a scene where Nadine goes on a ‘date’ with a boy she’s crushing on, goes perhaps a tad too far in making it’s point that this guy isn’t what she needs. It’s a bit rough and uncomfortable and sticks out somewhat when the rest of the film had a nice balance to it between comedy and drama. Nadine also seemed a bit too smart to make such a dumb mistake and it seemed a little out of character for the socially inept girl even if she was confused and frustrated at this point. Despite some minor flaws this is a well written and directed tale of a young girl trying to become a young woman who remains herself, yet doesn’t feel so isolated in the world around her.

As for the actors, Craig gets good work from a good cast. Hailee Steinfeld gives a spunky and spirited performance as Nadine. The character of the sarcastic loner has been seen before, but Steinfeld injects her with her own personality and really plays well the emotional confusion of being at that age between teen and adulthood. She delivers the lines with a cynicism of an older person, yet portrays a girl not quite old enough to handle some of the things she’s feeling. At that age you overreact to some things and under-react to others and the script and actress nail that very well. Hailee Steinfeld is a star in the making. While it is a one woman show, to a degree, there is some great supporting work. Harrelson once again proves he has become one of the most consistent and durable actors around with his cynical, yet caring performance as Mr. Bruner, Nadine’s favorite teacher and the one she comes to when she needs guidance or someone to rant to. Harrelson deftly captures the balance of a man who knows that sometimes teens need to figure these things out for themselves and yet, sometimes they need a little help. Solid work from an actor who has become a reliable performer in a variety of roles. Kyra Sedgwick is good as Nadine’s self absorbed widow of a mom. She gives us a women who wants to have a better relationship with her daughter, but is frustrated as to how to achieve that. Hayden Szeto is charming and likable as Erwin, a boy Nadine befriends who is a quirky film nerd and may be what Nadine needs, if only she stopped looking past him to realize it. Haley Lu Richardson is likable as the Nadine’s best friend Krista, who is difficultly caught in the middle of Nadine and her brother when she starts dating her popular sibling. Rounding out is former Glee actor Blake Jenner, who adds some nice depth to what could have been the stereotypical popular jock as Nadine’s brother Darian. A very good cast that make a good script come to life.

Overall, I really enjoyed this coming of age flick for taking the clichés and adding a feisty coat of paint to them. It had some nice emotional depth, some heartfelt humor and some delightfully, witty dialogue, even when being a bit raunchy. It stumbles a bit with a scene that was maybe a bit too uncomfortable for it’s own good, but that sequence had a purpose and did serve it, thought bluntly. Otherwise filmmaker Kelly Fremon Craig delivered a spirited and empathetic movie in a film sub-genre that can be crass and crude while forgetting the emotional turmoil of this sensitive age…one thing The Edge Of Seventeen does not overlook.