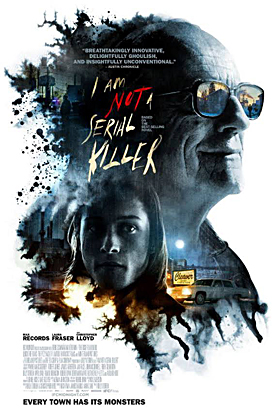 Horror/thriller is based on the first book of the same name from Dan Wells’ trilogy about sociopathic teen John Wayne Cleaver. Fifteen year-old teen John Wayne Cleaver (Max Records) is currently being treated by a therapist (Karl Geary) for having homicidal thoughts. Not helping John is that he lives and works in his mother’s (Laura Fraser) mortuary and is surrounded by death on a daily basis. He sets up rules to control his urges, despite being fascinated with death and serial killers, but things take an odd turn when people in his small Midwestern town start showing up dead. John becomes obsessed with the case and sets out to find who this serial killer is…and his first suspect may be his kindly old neighbor Mr. Crowley (Christopher Lloyd). Is John over-imagining things due to his dreary obsession, or has he found real evil in his sleepy little town?

British/Irish flick is directed by Billy O’Brian with the book based script written by he and Christopher Hyde. It is part horror, part mystery and part character study as we watch a boy investigating the very type of activity that he struggles with himself not to commit. It is an interesting study of an interesting character as John fights with his inner dark urges and by contrast sees death everyday working with his mother and now by pursuing a killer. It is offbeat and intriguing and O’Brian avoids a lot of clichés by not making this a straight up serial killer thriller, but from the view of someone who might be one in the making, himself hunting another. A sort of teenage “Dexter” if you will. There are some brutal and disturbing moments and the film only stumbles a bit when it’s reveal conjures something far less grounded than we expected from the tone of the film up till that point…though it is effective and the film does come to an appropriately suitable conclusion that fits the story and direction it took. It just was a bit off-putting that the film’s killer is something a bit more supernatural when the film seemed to be examining the evil’s that men do.

The cast are all good. Records makes an intriguing and odd youth in his John Wayne Cleaver. He is certainly not your normal kid and he knows it. He knows there is something wrong in his head and the young actor portrays well the conflict and effort to avoid becoming something he already has shown great potential in being. The fact that he pursues another “like” personality seems, at first, to be more out of curiosity than to battle evil. Laura Fraser is solid as John’s single and hard working mother. She conveys well the frustration of loving her child yet knowing he is a bit unstable and has urges that could turn dangerous. Christopher Lloyd is a veteran actor and gives the old neighbor Crowley a nice sympathetic touch so we find it hard to believe that this kindly old man might be a monster on the inside. Solid acting from supporting cast members as well.

I liked this movie, though didn’t quite love it, despite a novel premise. It features a sociopathic lead who is fighting to control his own homicidal urges while pursuing someone else who is giving in quite brutally to theirs. The reveal kind of switches the focus to something more supernatural, when the film seemed to be telling a more grounded story and that is a bit off-putting. Director and co-writer O’Brien does recover and ends the film appropriately and effectively. Recommended, but just go in without grand expectations.