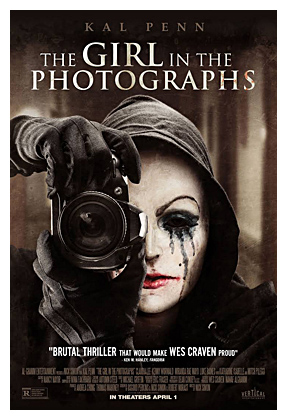 Flick is most notable for being the last film to be attached to the late, great Wes Craven as he was executive producer. Director and co-writer Nick Simon tries to give it a bit of Craven’s style, but the film is a mixed bag and a prime example of how a character and the actor playing them, can sink a flick like a stone. Story has pretty grocery clerk, Colleen (Claudia Lee) being sent photos of mutilated women by a couple of psychopaths. The photos also capture the attention of pretentious and self-centered, L.A. photographer Peter Hemmings (an awful Kal Penn) who, for some reason, travels to Spearfish, South Dakota to meet Colleen. Suffice to say this new attention  to Colleen does not sit well with the psychopaths in question and people start to die.

Co-written by Oz Perkins and Robert Morast, the film, obvious by the plot description, has a weak story that ultimately doesn’t really go anywhere. Major plot holes abound, like the local police practically laughing off the fact that Colleen is getting pictures of dead girls and despite disappearances in the area, these local Barney Fifes (including a wasted Mitch Pileggi) don’t seem to feel there is anything worth investigating here. Add to that, gratingly annoying photographer Hemmings, finds out everything he needs to know about it online on a blog and feels these photos are personally calling him out, even thought they are being sent to Colleen, not him. If you are scratching your head, you are not alone. So Hemmings and entourage go to Spearfish and instead of investigating the photos, Hemmings becomes obsessed with making Colleen his new model. Ummm…what? This sets in motion more brutal murders from our killers, who we meet early on and are never given any sort of motive or reason for their actions. Just two redneck weirdos (Luke Baines and Corey Schmitt) who enjoy brutal killings and for no real reason have become obsessed with Colleen. There are a few brutally effective scenes and our psychos are very creepy, if not underwritten, but the plot never comes together or makes all that much sense as a cohesive story. There is very little suspense and the flick basically comes to a sudden and unsatisfying end. At least the production had legendary cinematographer Dean Cundey to give the film an atmospheric look.

The cast are a very mixed bag, too. Claudia Lee is fine as Colleen and she is a girl who can handle herself. She is pretty, though the character lacks the magnetism that seems to attract psycho killers and jerk photographers alike. Speaking of which, Kal Penn is absolutely awful as Hemmings, who is a an annoying character to begin with. The character is just a self-absorbed, prima donna and with Penn’s performance, it’s like fingernails on a chalkboard whenever he speaks. He is completely unconvincing as a sexy, genius photographer and really drags down an already weak movie. Kenny Wormald is fine as Colleen love interest…another plot element that goes nowhere… and member of Hemmings entourage, Chris. He seemed like a bit too much of an ass-kisser to get the interest of a strong-willed, independent girl like Colleen, IMO. There is also scream queen Katharine Isabelle, former Disney channel star Christy Carlson Romano and the awesome Mitch Pileggi all wasted in small roles.

Suffice to say, it’s disappointing the Wes Craven’s legacy ends with his name on this misfire. The flick has barely a cohesive story, there is no real suspense and none of the characters have much motivation for what they do. Kal Penn is not only insufferable as Hemmings, but the characters is awfully annoying as written and really serves no purpose, like a lot of the characters here. There are a few effective scenes, mostly because they are brutal and the redneck psychos are creepy, if not purposeless in what they do. Saving grace has former Carpenter D.P. Dean Cundey lensing the flick and the appearance of some fan favorites in small roles. Not completely awful but definitely forgettable.

One thought on “HORROR YOU MIGHT HAVE MISSED: THE GIRL IN THE PHOTOGRAPHS (2015)”